Police stole billions in a 20 year period because of the profit sharing incentive behind civil asset forfeiture between federal and local governments. 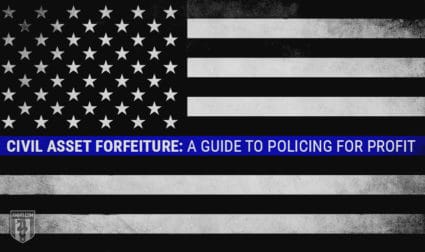 Nobody likes it when a burglar breaks into their house and steals their property. No store owner looks forward to a day when someone points a gun at them and steals money from their business.

But, as you’re about to discover, thieves aren’t the only people who eagerly steal someone’s property.

In fact, I was surprised to find out that another organized group has actually stolen more property from 2000-2020 than burglars…

This was accomplished by leveraging a policy known as civil asset forfeiture, which is more like a loophole, according to the Institute for Justice: From 2000-2020, “states and the federal government have forfeited [i.e., stolen] at least $68.8 billion—that we know of.”

Of course, not every state provides full data, so that figure is likely to be severely underreported. But the bottom line is, each year the authorities confiscate more money and property than burglars do.

The Institute’s report, titled “Policing for Profit,” also reveals another disturbing fact. Once property is seized, it’s challenging and sometimes not worthwhile to reclaim it:

First, owners must initiate a lawsuit in court, file a claim with the seizing agency or prosecutor, or respond to the government in court.

There isn’t any guarantee a U.S. citizen would get their property back, and on that basis alone most don’t even try.

That makes this egregious violation of liberties extremely hard on property owners — but great for local, state, and federal governments that are looking to score an easy payday.

“Okay,” you say. “But the government only goes after criminals, right?” Unfortunately, that’s WRONG. The truth is…

Most Civil Asset Forfeiture Happens For No Good Reason

In about 80 percent of all civil asset forfeiture cases, the police don’t even pursue charges. None, nada, zip.

And here’s the evil part: All it takes is mere suspicion of a crime, and forfeiture can take place. Once assets have been seized, innocent U.S. citizens who want their property back have a long (and expensive) road ahead of them.

That’s because — unlike law enforcement — victims of civil asset forfeiture have to follow the legal process I just outlined, and then roll the dice.They might get their stuff back (at incredible expense) — or they might not.

Most people would call the practice of civil asset forfeiture theft, especially if there was no crime committed by the citizen in the first place.

Nevertheless, police departments have tried to justify this particular form of theft by claiming it helps them take down drug kingpins. The problem is, a 2020 study revealed that their excuse doesn’t hold water (the median drug take was only $1,300 per monetary seizure).

So law enforcement at the state and federal levels seize billions in assets, but where does the money go? That’s a good question to ponder. Because based on the data it seems like they’re robbing innocent people and profiting from the proceeds rather than addressing (and discouraging) crime.

And despite the obvious moral issues, law enforcement seems to be able to carry out these seizures effortlessly, even if a state has decent legal protection for property owners. With that in mind, here’s their “secret”…

This Giant Legal Loophole Makes It Easy For U.S. LEO’s To Take Your Property

“Equitable sharing” is a phrase that sounds innocent enough at face value. But when it comes to civil asset forfeiture, this phrase takes on a more nefarious meaning.

The “Policing for Profit” report briefly explained the basics:

So it looks as though the U.S. Federal Government provides states with leverage for their police to act much like the mafia would — so they can take stuff from innocent citizens with impunity.

And with $68 billion confiscated, it’s a good bet it’s too lucrative for them to voluntarily stop. That means you should have a backup plan if this “mafia” ever eyes your assets.

How to Keep Your Options (and Exits) Open

Today, it’s more important than ever to be able to leave the country you live in and set up shop in a foreign country. And I’d like to show you how to do that.

P.S. I hope the police never come knocking with the intent of taking a big chunk of your assets. But it’s still smart to plan as if they will.

To help you prepare a “plan B,” I invite you to become a GWP Insiders member and learn the strategies for keeping your options (and exits) open…

Learning from the Emergency

What can everyone learn from what's been happening the past […]