American politicians have taken a sour position against several countries, but our sanctions are forging unlikely alliances amongst those in the “American Sanction Club”. 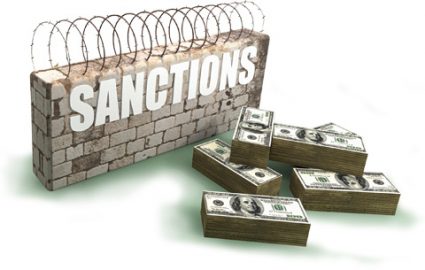 Despite the hard line western politicians draw against Russia and China and even Iran, if you throw enough countries in the same cell, you will inevitably see unlikely alliances emerge.

The US hasn’t a leg to stand on when it comes to humanitarian alignments in its foreign policy. So the idea that the US has some moral high ground when it places sanctions on other countries, is patently false.

The US has decided to level sanctions on several countries, and in so doing, basically put their “most hated” list of countries in the same holding cell. With no means of working with the US, these outcasts formed a new alliance.

I’ve covered several aspects of this for a few years now, and the incredible part is: it’s improving!  It’s not ALL sunshine and roses, but it’s not the devastation and chaos people were expecting. Sanctions plus a severe drop in oil prices was not exactly pleasant for Russia… but this might have been the kick in the pants they needed to spur growth in other areas like agriculture.

When RT asked investor and financial commentator, Jim Rogers, “To what extent have Western sanctions harmed Russia’s economy from your point of view, and what will it take for them to be lifted?” Jim replied with:

“In many ways the sanctions against Russia have helped Russia. It has made Russia an agricultural boom. It is a very, very strong growth industry right now. It pushed the Russians together with the Asians. When you come to Moscow or St. Petersburg airport now the Chinese are everywhere; Asians are everywhere. This is actually helping Russia in some ways, and it certainly is not helping America. We’re not getting anything out of it.”

Even what constitutes “the West” is shrinking bit by bit. As I mentioned in an earlier article regarding the lift of sanctions against Iran, there are numerous multi-national corporations chomping at the bit to tap [back] into the Iranian market. Volkswagon, in fact, recently announced they plan to start exporting within the next month or so, to Iran. After a near 17 year absence from that market, they are returning. Why? Because pride cometh before the fall. They cannot simply rely on the same customer bases and expect them to sustain them. Exports to China went down a reported 3.3%, while “annual sales in the Iranian market are seen rising to about three million cars over the medium- to longer-term,” says VW, citing government estimates.

The Siberian gas line between China and Russia is set to begin in 2019. That’s less than 2 years from now. The $10 billion bilateral trade fund, or the Russia-China RMB Cooperation Fund, is a signed deal.

Meanwhile the US is considering a sanction against Russia that could very well shoot themselves in the foot. Notorious for their short-sightedness and disregard for unintended consequences, the proposed legislation takes a much harder strike against American companies than Russian. As it is now, American energy companies cannot participate in any energy project… IN RUSSIA. The new legislation expands that to worldwide.

“This poses a problem because of how energy companies are required to cooperate when drilling for deep-water reserves. Typically, multiple oil and gas firms will be granted different exploration blocks covering a single oil field. Governments often require that the owners of the associated blocks work together on one development for all of the blocks and share the costs. Governments offering deep-water concessions require such cooperative frameworks as a means to create the safe and efficient development of their natural resources.” (Source: The Hill)

Since international deep-water exploration is collaborative by nature, there is nothing the US can do to prevent Russia from bidding on a tiny block in every single project around the world, and block the US by its own sanction regulations from getting in on the action. Russia would not have to exert much effort to block the US from participating in energy exploration projects.

And if Russia didn’t have the means, they could just bid enough to where it opens the way for China to get in uncontested by the US.

I don’t care if that’s not what the intensions are, that’s what likely to happen.

Let’s say the US doesn’t get in on the action because the big bad Russians are there. What does that entail?

“The provision in question could exclude U.S. oil and gas firms from over $100 billion in investment opportunities over the next 10 years, costing Americans well-paying jobs and hurting the 401(k)s and investment portfolios of nearly every American.

A 2013 study estimated, for example, that opening up the Atlantic outer continental shelf for oil and gas exploration could generate almost 280,000 jobs and pump up to $23.5 billion a year into the U.S. economy. Multiply those figures by the many more exploration blocks already available worldwide and the harm to America becomes even more profound.”

You think immigrants are stealing your jobs? Who gets those 280,000 jobs and $23.5 billion per year in energy projects? Yeah, they don’t even have to come to the US to steal jobs. The US Congress and president can just put the kibosh on those jobs right now.

At some point, the United States will need to stop with its spiteful policies and get out of its own way. Free trade and collaborative efforts that further mutual interests is the path to peace and prosperity. Sanctions then, are the exact opposite. They create hostility, and kill economies… and to what end? In the effort to put America first, US politicians could very well seal America’s fate to come in dead last.

Market forces insist that businesses and people remain vigilant in […]