Market forces insist that businesses and people remain vigilant in their innovation and adaptation to new conditions and advancements. 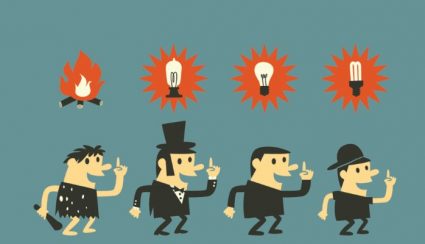 The market is calling for innovation and adaptation. Some creative destruction is afoot, and it is necessary. Something needs to come along and shake the complacent inert space trash and change the trajectory a little.

Earlier, I wrote a piece about the lackluster performance of the US first quarter performance and the changing attitudes of the US consumer base. Turns out it warrants a sequel, because there is more to it.

Here are a list of things that are slowly being phased out:

So while unhinged Republicans are sniveling over immigrants “stealing their jobs” the truth is, many jobs are just being phased out. If it isn’t being outsourced, it’s being automated. And if it’s not either of those things, it’s being replaced entirely.

But this is the continuation of human evolution right? It’s not really the survival of the fittest, as much as it is survival of the adaptive. When your job ceases to be, what will you do next? How will you adapt? If you are a CEO of a place like Macy’s, and you just watched your sales plummet quarter over quarter, how will you adapt your model?

It’s not that people aren’t spending money. They absolutely are. But where? And with whom? And on what?

I think all this phasing in and out was given some incentive by government policies. It’s the unintended consequences of life costing more due to inflation, and expecting to regulate wages to keep up with inflation. Raising wages is raising the cost of labor which in turn raised the cost of goods and services which makes living more expensive. It’s really very circular and dizzying to watch these failed policies unfold.

In any case, we have evidence of failed policies and models to share now. It’s important not to point at and mock failure, but to learn from it lest we walk right back into that same thinking and fail again.

After a considerable hit over the holidays and never rebounding in Q1 2017, Macy’s announced they will be closing 68 store locations. While 9 locations already had been announced to close earlier on, the total affected employees come to about 3,900. Combine that with their initiative to eliminate layers of management and you have just over 10,000 jobs that could be lost.

JC Penny and Sears are also closing stores, so this isn’t unique to Macy’s. Combined the three retailers are closing 400 retail locations. That’s kind of a big deal.

But Macy’s picked up on the market cues. They are going the way of the discount retailer. They adopted several of their business model practices already: such has having a section dedicated to clearance items, self-service shoe and make-up departments, selling their off brands and deeply discounted rates. Macy’s will soon be indiscernible from Ross or Marshall’s.

Adapt or die. This is as true for business as it is for people. And what’s funny is, people mock businesses for their profits, but these same people are nowhere to be found when the business fails.

But these people are quite quick to assume that these businesses can afford $15 per hour minimum wages!

Life is getting more expensive, so consumers aren’t spending the same way they used to. Businesses are trimming the fat and streamlining their models to pass down the savings and make themselves more affordable. But that entails cutting employees.

So what should we do? Raise the minimum wage of course!

University of Washington studied the effects of the minimum wage hikes in Seattle. And here’s what it found (you might want to sit down, because NO ONE saw this coming…):

How did this improve the lot of anyone? Unless you’re one of the experienced people who already got into the labor force absorbing the jobs of your past for a bump in pay, this didn’t sort out the issue of a living wage for very many people. In fact it made life more unaffordable.

Moreover, how are the unskilled expected to gain experience if they can’t produce enough to warrant the minimum wage? What this essentially did was increase the barrier to entry.

The folly of socialist policies could not be better demonstrated than by our friends in Venezuela. In the last for years of Nicolas Maduro’s presidency, the Venezuelan Bolivar has plummeted in value by 99.7%. So much so, that when Maduro raised the country’s minimum wage by 50% on July 2nd, 2017 “to just over $12.50 per month at the black market exchange rate”, it was still “effectively down 17% in dollar terms since the last increase in May.” (Source: Reuters)

You can’t bail terrible monetary policy out with terrible economic policies, or vice versa for that matter. It just doesn’t work that way.

With every manipulation from government comes a response from the market that cares little about the feelings of economic snowflakes. The market doesn’t care that your 22 year old graduate with a degree in Women’s Studies has $45,000 worth of debt and can only get a job slinging coffee. The market doesn’t care that you were once a big name in retail and are losing market share.

If you are going to pay for something, pay for experience and marketable skills. If you want to stay in business supply what is in demand. It’s time to adapt.