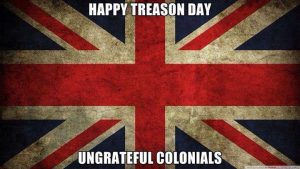 On July 4th, 1776, the document penned by Thomas Jefferson known as the Declaration of Independence was adopted by the original 13 United States of America.

It was signed by 56 delegates of the former British colonies as an act of defiance against Great Britain. It was a defining moment that has had a lasting impression on the world ever since.

The most famous signature on the document was penned by John Hancock. The signature was so famous that even today we ask people to put down their “John Hancock” to sign important documents.

What was it that the former colonialists and their 56 delegates were fighting against?

Certainly there were other issues at stake, but the main issue was that the people in America no longer felt their British rulers had their best interests in mind and were no longer using the tax dollars for improving the lives of the colonialists.

The parallels for today could not be more clear.

During the Obama administration the national debt more than doubled. Said another way, the politicians borrowed more money that all previous administrations combined because they could not be bothered with fiscal conservation and chose to spend money on whatever they pleased.

Did any of these trillions of dollars benefit your life? Do you feel adequately represented?

In 2016 the US spent over $600B on defense. That is more than the the next 8 countries combined in total annual defense budget (reference).

Do you feel safer?

Do you feel adequately represented?

Think about that one for a minute. That is 12% of the total federal budget!!!

If you want to have your mind blown, click this link and watch the numbers.

The US is now fast approaching $20T in total debt.

Just to grind a little bit more salt in the wound, the health care system is in shambles and Americans now pay BY FAR the most of any country in the world for mediocre levels of health care.

You could even consider it an additional tax since many of the countries with higher personal tax rates offer free (well, paid by taxes) health care.

If you were in Canada, you would pay a slightly higher personal income tax, but no health care cost.

(*disclaimer, I am not an advocate for a single payer system, just showing you the math of the system).

So in 1776, a group of men who were sick and tired of paying taxes to a government that provided them little or no value for their money, decided that “enough is enough”.

And they declared independence.

I find it hugely ironic that today is the day that Americans celebrate with hot dogs, hamburgers and fireworks while chanting their freedom mantras.

Unfortunately Americans are anything but free. But the mainstream media does a bang up job convincing you of this illusion.

Thomas Jefferson and John Hancock would be embarrassed.

My guess is they would now be signing another declaration of independence to separate from the current US system of government that taxes you without providing any real benefits.

Today we don’t need another 56 courageous men willing to sign the 2nd declaration of independence.

We need 300M+ courageous people to realize independence begins at the individual level.

In order to become truly free, one most first understand they must accept responsibility for their own actions, both good and bad.

We need to go back to our entrepreneurial roots and provide value to one another. We must take responsibility for our personal lives and our financial future.

We need to stop relying on a government pension or company retirement plan to ensure our future. We need to stop banking on social security or welfare benefits as a back up plan.

And Plan A needs to be relevant and provide you with safety and opportunity no matter what happens.

A great Plan A may look something like this:

This is just a brief highlight of what your Plan A strategy may look like, but certainly not an all-inclusive list.

In honor of Brexit 1776, I am offering a 50% discount for our offshore banking report. In this report you will find;

In order to get your discount, just “Brexit1776” (without brackets) in the coupon code box at the following link:

===> Click here to get the Offshore Banking Report now