After pacifying Catalonia for generations, Spain strikes at this once autonomous nation’s effort to secede from Spain once and for all. 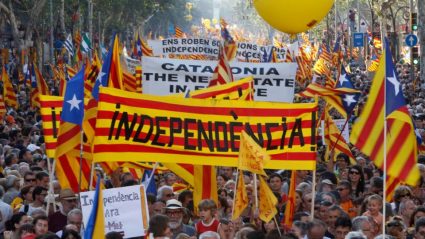 To varying degrees, the nation of Catalonia has been trying to secede from Spain since the mid 1800’s. With a population one million shy of New York City, and a geographic area roughly equivalent to that of Massachusetts and Rhode Island combined, this movement packs a punch.

Within the country of Spain, it is of great consequence what happens to this northeastern community. It happens to be the second most densely populated municipalities in Spain, as well as the seventh most populous area in the EU. The region is rich in history, and in fact has its own language. Unfortunately, each time it lost its autonomy, that culture and language was banned. The most recent example being in the 1930’s.

It has demonstrated its ability to be economically independent of the rest of Spain in the distant past, but I don’t know if the rest of Spain can afford to lose that region as it represents close to 20% of Spain’s economy. If the secession were to happen, the likelihood of a Spanish default goes from tenuous to almost certain. Catalonia’s debts are not much better. This northeastern territory, however, holds quite a decent economic hand:

“Catalonia is a major center for transportation, handling 70% of exports from the rest of Spain. If the region becomes a separate country, the cost of moving those products would increase and further weaken the Spanish economy.

“GDP per capita in Catalonia is one-fifth higher than the rest of Spain. Catalonia also produces 45% of Spain’s high-tech exports, such as automobiles and electronic products. The region is the most productive in Spain.”

The exposure of these pain points would leave the EU and other economies to question the stability of the region.

While Western Europe loves to tout the virtues of the democratic process and the “will of the people”, it likes to define the parameters in which that can work. Similar to the United States and its glorious two-party system, our dissent is limited and structured to partisan politicking. Going outside that prescribed space is likely to be met with a heavy hand.

While I don’t agree with Noam Chomsky’s political conclusions, his observation here is spot on:

“The smart way to keep people passive and obedient is to strictly limit the spectrum of acceptable opinion, but allow very lively debate within that spectrum….”

The regional President of Catalonia, Carles Puigdemont, declared victory for Catalonia. The Spanish Prime Minister, Mariano Rajoy, however, claims the vote for independence was illegitimate.

The majority of the votes casted were for independence, but the majority of voters didn’t actually participate. The second half of that last sentence is one reason for which PM Rajoy deems the referendum illegitimate.

Three things to factor in: first, elections are rarely legitimized by the turn out. If you have 1,000 eligible voters, and only 400 turn up to vote, the tally continues and winners and losers are still determined from that turn out. 46% of American voters stayed home during the last presidential election in 2016. With less than a quarter of the popular vote, Trump became the US president. Now granted, the election rules are different with the US having an electoral college, but it does demonstrate on a large scale how turn out isn’t everything.

Second, is the criticism of low turn-out really legitimate, when Madrid sent in police squads to keep Catalans out of the polling booths?

“Soon after the polls opened, Spanish riot police smashed into the voting centers, their raids caught on mobile phone cameras that showed them whipping ordinary citizens with rubber truncheons and dragging them away by their hair.”

Third, had the vote gone the other way, Madrid would not be turning a deaf ear to the “will of the people”.

Perhaps the methods used were not in accordance with the Spanish constitution; and admittedly this vote was sloppy. But civil disobedience and revolution are rarely graceful except when recounted centuries later in poems and anthems.

A criticism about the referendum is that due to the lack of organization and protocols, the count of the votes might still be inaccurate:

“Just before the polls opened, the Catalan regional government declared that any registered voter could vote anywhere — instead of having to visit their assigned polling station in their home towns. The voting lists, the regional government said, would be digital and not printed as usual for the polling officers to check against identification cards.

“But there were problems right away with registering the voters — and the online system was balky. And this, among all the other irregularities, raised questions about the legitimacy of the vote.

“Those who opposed the vote — especially the people who want to remain in Spain — scoffed that the Catalans were being allowed to vote as many times as they like.”

Recent polls suggest that most of the Catalan voters would support a referendum to secede from Spain. The separatist movement has gained more momentum with the economic mismanagement from Madrid as well as Madrid’s denial of self-rule attempts by the region.

“Rajoy’s government has repeatedly refused to grant Catalonia permission to hold a referendum on grounds that it is unconstitutional since it would only poll a portion of Spain’s 46 million residents.”

But why would or should the rest of Spain have a say in what happens to Catalonia? I mean, to put this up to a vote to the entire country means independence is a matter of consensus. That has some rather grim implications.

My natural inclination is to side with secession. Secession is freedom, autonomy, and self-determination. The struggles and hardships that might await both sides, is just a long overdue reality that neither side can afford to ignore any longer anyway. I chose the challenge of entrepreneurship over being someone else’s employee for the same reasons I believe many regions are taking up secession movements: the difficulties of independence are worth it. If now is not Catalonia’s time, then the very near future should be.

The “consultation period” on Bill Morneau’s tax proposal is closed […]