China and its petro-yuan are positioning themselves to give the United States a run for its petrodollar. 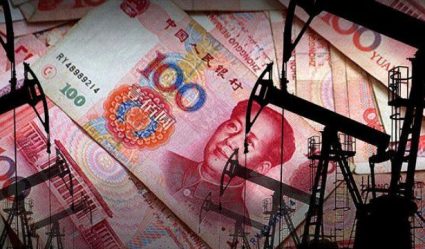 The United States has not been doing itself any favors in terms of foreign relations. We have covered quite a few instances where China and Russia have collaborated with one another to work around the United States.

And can you blame them?

The US has been quite hostile between its sanctions and tariffs. For a country that is supposed to embrace free markets, the US has been a poor example.

The United States openly alleged that Russia interfered with the 2016 elections; while it’s no secret that the US has tampered with other countries’ elections, overthrew sitting leaders, and installed new ones.

The United States insists that the country that holds the largest amount of US debt is engaging in unfair trade practices and has a “trade deficit” with the US.

At no point does the US take any responsibility for its actions which ultimately has precipitated this desire to avoid them at all costs. The US is full of people who are frustrated at individuals who refuse to take responsibility for themselves, but it’s become somewhat normalized politically.

It hasn’t even been a decade since the Libyan leader, Muammar Gaddafi, was toppled with the help of US forces. This one is particularly interesting, because if this chicken comes home to roost (and it certainly looks possible), the US will feel it.

Gaddafi, among other things, wanted to get the world away from US dollar dependency and the petrodollar. At the very least, he wanted to provide countries with an option, by introducing a regional gold-backed dinar with which to trade oil in the middle east. Clearly that was a dangerous agenda, and was not realized before his demise.

However, one country stands to possibly pick up that baton and keep running: China.

China has been the glorious tortoise in this race. Slow and steady… patient and diligent… While she is not without her own issues, China tops the charts with foreign investment; joins the IMF basket of reserve currencies; is the largest foreign holder of US debt; aligns with Russia on various international projects; and has surpassed the US in purchasing power.

I’m not saying the renminbi is supplanting the US dollar tomorrow. It’s not. But it’s certainly positioning itself to do so. It has Russia, Iran, and Venezuela already excited at the prospect of not having to seek US approval to trade their resources. These are major producers of oil in the world too. They aren’t Saudi Arabia… but they aren’t the minor leagues of crude either.

The launch of the petro-yuan March 26th, 2018. Despite some reasonable hesitations, it didn’t flop:

If more businesses and countries decide to trade yuan-backed oil contracts, could not only strengthen the yuan, but weaken (i.e. inflate) the dollar. Carl Weinberg, chief economist and managing director at High Frequency Economics observes the following:

China has a lot of momentum on its side. It happens to be the world’s largest oil consumer – surpassing the US in 2017 — which also happens to be an undeniable piece of leverage… if not the lynchpin to the petrodollar. This is precisely the kind of leverage that can be used to pressure the Saudis into acquiescing:

“Russia is challenging Saudi Arabia’s spot as top oil exporter to China. In fact, Russia has sold more oil to China than the Saudis seven times since May 2015. According to statistics from China’s General Administration of Customs, Russian oil exports to China increased nearly 42% to over 22 million tons from January to May. For the same period, Saudi oil exports to China totaled 21.8 million tons.”

China has a few things it needs to address to ease the timid nerves of would-be investors, as well. It needs to sort out the logistics of storage. It also needs to avoid suggestions of dominance, and perhaps take the approach of offering an alternative, in its rhetoric and initiatives.

They need Saudi Arabia to seal the deal though.

Perhaps China waits. There has been quite a bit of turbulence in Saudi Arabia of late, especially in the wake of the “royal purge” back in November 2017. It’s only been a few months, but if Prince Mohammed bin Salman is genuine about uprooting corruption and returning Saudi Arabia to moderate Islam, he might consider the Chinese proposition.

I’m rather surprised how little coverage the March launch of the petro-yuan received… and yet I shouldn’t be. The US will complacently remain distracted, as the heat gets turned up. This is truly a story of the tortoise and the hare: and the United States indubitably is the arrogant hare in all this.