The new Assault Weapons Ban bill seems more concerned with banning scary looking things than it is with safety or reducing mass shootings. 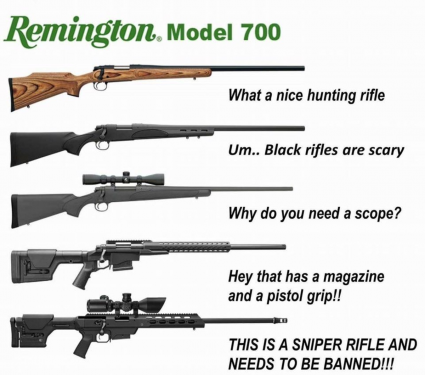 In a matter of a couple weeks after the Parkland, Florida shootings, an Assault Weapons Ban bill – introduced by David Cicilline (D-RI) and Tech Deutch (D-FL) – is waiting on the House floor for congressional consideration.  Just don’t expect it to make anyone safer.

Those who already have any of the recently banned weapons, and obtained them through legal means, would be grandfathered in and allowed to keep them without issue.

The very abridged version is that this legislation seeks to ban guns such as the AR-15 from being imported, sold, manufactured, transferred, or possessed in the United States. “Assault” in this legislation involves high capacity magazines (i.e. greater than 10 rounds) and a semi-automatic feature.

The bill goes into great detail listing all the features that would no longer be legal for a firearm to have, such as: pistol grip; forward grip; folding, telescoping, or detachable stock; grenade- or rocket-launcher; barrel shroud or threaded barrel.

What’s odd is that some of these features really don’t make a gun any more lethal. A semi-automatic rifle can get more rounds off than a single-shot rifle, which makes it a more efficient weapon and therefore, arguably, more lethal. Okay. But how does a pistol grip or telescoping stock make the gun more lethal? It doesn’t.

So, this law apparently has more to do with appearances and ergonomics than preventing mass shootings.  The truth is, there is no amount of regulation or prohibition that will achieve that.

Regulating the capacity of the magazine, for example does what? In theory, it mitigates the efficacy of the firearm. But a trained professional would take hardly any time at all switching out magazines, and the Parkland school shooter used a 10-round magazine for the purposes of portability and convenience.

The bill contains an exhaustive list of approved and banned firearms by name. Two rifles that stand out are the Ruger Mini-14 and the Beretta CX4. The former was used in the 2011 mass shooting in Norway, and specifically NOT banned. The latter is on the banned list.

“Both rifles are semi-automatic and accept detachable magazines. The Mini-14 fires the same ammunition as the AR-15, the 5.56 rifle round. The CX4 fires the weaker 9mm luger pistol round. The relevant difference for the bill’s sponsors seems to be that the Mini-14 looks like a traditional rifle with a wooden stock, and the CX4 looks like a prop from a science fiction movie.”

While it seems like gun violence is in every square inch of media coverage, the truth is, mass shootings aren’t really on the rise. Seeing it more because of 24 hour news coverage and social media, doesn’t necessarily mean it’s happening more. There were far more mass shootings prior to cable news and social media outlets. And their occurrences have slowly decreased despite the expiration of the assault weapons ban in 2004.

Unlike the MSM, I’m not actually interested in profiling the type of person who perpetrates these things. Those statistics are irrelevant to the right to own property and defend it. These rights aren’t even contingent upon citizenship.

I’m likewise not concerned with the statistics behind gun use or gun death/injury. Don’t get me wrong, I think one preventable death is a tragedy, but it still is irrelevant to the discussion of the right to property and defense of it.

I recently saw this info-graphic indicating that for every life lost to a gun in self-defense, many more were lost in suicides, homicides, and accidents. The argument being: it’s not worth all that death, to save the one. 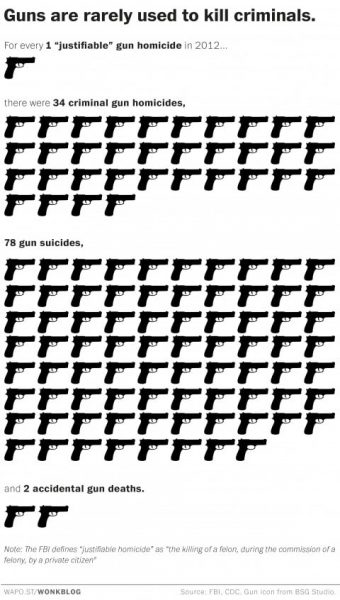 No one embraces greater-good pragmatism the way “progressives” do. It’s astounding to me that by dominating the discussion with a focus on the large number of preventable deaths, an argument could then be made suggesting the one life saved isn’t worth it.

That’s because they phrase it as: All that death isn’t worth saving one life.

What if we rephrased it though: The one person shouldn’t be sentenced to death because others are committed to taking their own lives, or a life of crime, or are careless.

The first two categories – suicide and criminality – are responsible for the most gun related deaths in the United States. But banning guns no more prevents suicide and crime, than banning drugs prevents addiction. Addressing intent by going after the means is folly at best.

Japan, for example, is heralded as the paragon of successful gun control. Never mind that Japan and the United States couldn’t be more diametrically opposed culturally and demographically; but Japan happens to have a very high suicide rate, gun control notwithstanding.

Australia is another example touted about by gun-control advocates. Much like any other statistic, it’s important to look at a timeline. Was that thing already on the decline? Remember when people wanted to give Trump credit for the declining black unemployment rate? It was already falling before he took office. Or when people wanted to blame Trump for several brick and mortar shops shutting down before his tax plan even took effect. They were already one foot out the door because of their failed business model.

The gun statistics for Australia when compared to a comparable control group like New Zealand don’t make a very strong case for gun-control. The Justice Policy Journal did a study published in 2011 comparing the two countries and found: “…after taking into account difference in population size, Australia and New Zealand did not have statistically different trends in mass shootings before or after 1996. Indeed, New Zealand has not had a mass shooting since 1997, ‘despite the availability in that country of firearms banned in Australia.’”

What is even more damning is, a 2016 American Medical Association study, which analyzed the trends in Australia before and after their gun control legislation passed, “found no evidence of a statistically significant effect of gun control on the pre-existing downward trend of the firearm homicide rate.”

That same study did see a significant drop in firearm suicides soon after the passing of that, but concluded that “it is not possible to determine whether the change in firearm deaths can be attributed to the gun law reforms” because the “decline in total non-firearm suicide and homicide deaths were of greater magnitude.”

Speaking of other countries, it is rather interesting that there are some guns on the banned list that can easily be obtained in Canada such as Tavor TAR-21. Anyone want to wager what this bill will do to illegal gun running on the northern border of the US?

For whatever reason, the law abiding and productive members of society’s rights wind up in the cross hairs and on the chopping block of ambitious politicians who want to build a career off the backs of tragedies.

There are poor people! Tax those who have stuff to pay for them.

People were killed! Take the guns from those who didn’t kill them.

I heard one observation (and I wish I could attribute credit here, but it was unfortunately just in passing), that I want to paraphrase and leave you with: The violent actors are the minority. Peaceful people are the majority. Yet gun control comes after the rights of the majority, in hopes of controlling an uncontrollable minority.

Trying to makes sense of Trump’s budget and spending strategies […]