Trying to makes sense of Trump’s budget and spending strategies is a fool’s errand.  With military malfeasance and over spending, the US is not moving closer to economic solvency. 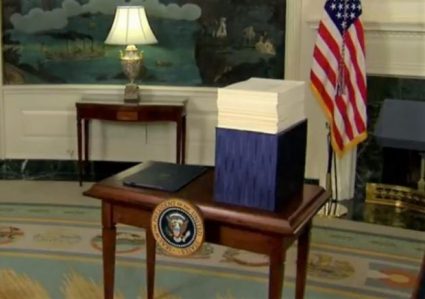 The more I read about Trump’s budget and spending policies, the less any of it makes sense. The aggressive nature of each of his economic policies, however, has me thinking this might all just come to a head.

Three major promises he made while on the campaign trail that had people losing their minds with excitement was the repeal of Obamacare, the building of a wall, and the elimination of the debt.

There were many other promises, but those were the big ones that stoked the hope of the conservative base.

Since then it’s become rather clear that Trump did not think his promises through. The first chance the Republican congress had to repeal Obamacare, and they failed.

We’ll build a wall spanning the entire US border! And we’ll have Mexico pay for it!

It was absurd on its face, but now the strategy is to have the Pentagon pay for it! For the record: I’m not for a wall; nor do I think the Pentagon can’t afford it. They can.   In fact, if the argument for the wall is national security, then it would make the MOST sense to have it come out of that budget.

The New York Times estimates that the wall would cost roughly $70 Billion to build and approximately $150 million annually to maintain. I figure the NYT would at least be good about giving us the grimmest picture in terms of cost to set some worst-case expectations.

Trump signed over $700 billion more per year to the Defense Department’s budget only a few months ago. What’s 10% among cronies? If I won the state lottery jackpot of several hundred million, I’d be kicking over 30% or more in various taxes back to governments at all levels. This is what government does. Every federal employee receives their paychecks from the federal government, and then still pays them back over 15% in income taxes.

If you think about it, Trump is promising $700 billion per year, but they have to give back 10% of one of those years to buy his precious wall.

While I certainly take issue with a border wall, I would hardly sympathize with the DoD having to pay for it.

The real problem with asking the DoD to pay for anything is that they have demonstrated time and again that they are incapable of managing their funds with any modicum of transparency, responsibility, or accountability. It’s the only department that can operate in such a blatantly unsustainable way, and still manage to get MORE of the lion’s share of funding.

As we wrote about earlier, the Pentagon will be undergoing its first ever audit. Last to the party, but the most anticipated guest, the expectation based on other financial evaluations is that something in the neighborhood of $125 billion per year will be found.

MEANWHILE… the Airforce will likely cut about 38% of its F-35s purchases over the next ten years because it can’t afford the upkeep and maintenance. That comes to around 590 planes per year. The cost of the actual plane isn’t the issue (which tells you how much money they are playing with). The development and production of a F-35 fleet of 2,456 planes is estimated at about $406 billion. However, according to recent estimates out of the Pentagon’s independent cost unit, “It may cost as much as $1.1 trillion to keep the F-35s flying and maintained through 2070”.

The Air Force needs to be cutting its spending over the next ten years by $3.8 billion annually, but operation and support costs are expensive: program management, depot maintenance, part repair, software maintenance, and engineering. None of that is cheap. And all of that is handled by Lockheed Martin. Half the operation and support costs go to Lockheed Martin.

So if the military is already in over its head when it’s not busy “losing” trillions of dollars at a time, how are they paying for this ridiculous wall?

More importantly, how does Trump ever expect to make a dent in the deficit when the department with the greatest allocation of the budget, has a serious problem controlling its expenditures? How does Trump expect to even broach the debt when he just passed a $1.3 trillion Omnibus bill? A bill, by the way, that “shut down” the government over what would happen to the DACA immigrants and the wall.

The DACA immigrants were sold out by their Democratic base. And Trump got some drop in the bucket for his wall.

One particular thing that stood out was the amount of financial attention New York and New Jersey expect to receive in infrastructure funding.

It’s called the Gateway Project which is meant to help with the infrastructure between New York and New Jersey.

“New York and New Jersey’s Gateway tunnel project — a collection of upgrades along a 10-mile span including the Hudson Tunnel — includes building a new rail tunnel under the Hudson River and rebuilding the existing deteriorating North River Tunnel that carries Amtrak trains every day between New Jersey and Penn Station.”

Seems like an awful lot for an 11 mile strip of the United States.

Between the malfeasances of the military, the tax cuts and tariff hikes, and the $1.3 trillion Omnibus bill how does this actually move the US toward economic solvency?

The aftermath of the Trump Tariffs is being both felt […]