The aftermath of the Trump Tariffs is being both felt and seen in various industries, and it’s only been a couple weeks. 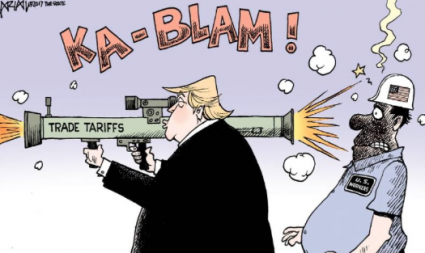 No sooner do I publish an article warning of the potential economic disasters associated with Trump’s Tariffs, do I see a week’s worth of various accounts pointing out the toll they’ve already taken.

It’s like telling a kid to slow down on the sweets because they might get sick… and 10 minutes later they’re complaining about a stomach ache.

The claim was that these tariffs were about putting America first. Buy American!

Let’s look at a company that is American through and through: Pennsylvania based American Keg Company.

They take a lower margin, and struggled to compete with their German and Chinese counterparts because their price point was about $20 lower per keg. Their kegs aren’t necessarily qualitatively better than their foreign competitors, but the difference in price seemed small enough to woo the sympathetic “Buy American” consumers like local craft breweries.

If the tariffs go according to plan, then the American company should come out ahead! The gap should close if not favor American Keg Company. Instead here’s what actually happened:

“Tariffs were one of Donald Trump’s campaign promises, and steel makers have already raised prices in anticipation. Since Mr. Trump took office, the price for American hot-rolled steel coil has increased by more than 35%, rising about $222 a ton, according to price data from S&P Global Platts. When the President signed orders imposing the tariffs on March 8, prices increased by more than 4% in a day.”

American Keg Company laid off 10 of its 30 employees… and if this persists, they will likely need to close their doors.

One of the biggest steel consuming industries in the United States is farming and agriculture. If the effects of the tariff are enough to price a small American keg operation out of business, what sort of exponential consequences will they have on an industry like agriculture?

“According to 2015 Census data, steel mills employed about 140,000 Americans and added about $36 billion to the economy that year, but steel-consuming industries employed more than 6.5 million Americans and added $1 trillion to the economy. In other words, for every steel-producing job in the country that might benefit from Trump’s proposed tariffs, 46 steel-consuming jobs are put at risk.” (Source: Reason)

What will a 25% tariff do to farming equipment? There are about 3,000 factories in Iowa alone that rely on steel and other metals. What becomes of them when demand goes down as prices go up?

More importantly, what will tariffs do to American agricultural exports? Chinese steel incurs a 25% tariff to get into the US? Okay. 60% of the soybeans grown in Iowa are shipped to China. Iowa exports corn, pork and beef as well. What happens to them? China returns the favor on 128 U.S. products, including those exported out of Iowa and other fly-over states.

So factory workers, farmers… any other proletariats we can bowl over? How about construction workers?

“While some housing can be built with wooden frames, projects taller than about five stories require steel. If steel gets more expensive, construction firms will be forced to reconsider large-scale projects that use large amounts of it. Large-scale, multi-family housing is the best solution to tight housing markets in places like San Francisco and Nashville, but they are the types of construction most likely to be affected by steel tariffs.”

In markets like San Francisco that are already suffering from unmet demand for affordable housing, the only direction to go in such an already dense area is UP. “Affordable housing” bids are often done on tight margins, so those will likely be the first to be hit.

Keep the structures lower then! Use only wood! Okay… except there was already a 21% tariff leveled on imported Canadian timber.

“More expensive materials and smaller-scale projects might force construction companies to lay off workers. According to a policy brief released by the Trade Partnership, a Washington-based pro-trade think tank, Trump’s tariffs will wipe out about 179,000 jobs—including an estimated 28,000 jobs in the construction industry.” (Source: Reason) 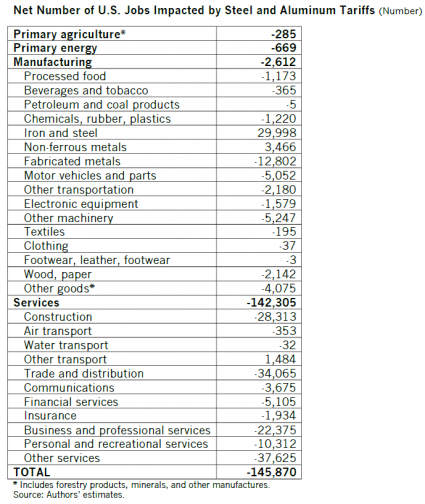 Even the stock market took a hit, in industries and areas that are financially tied to the tariffs on an estimated $60 billion Chinese imports:

Hold on America! This is what it’s like to be “first”!

One final consideration when evaluating the merits of tariffs from Benjamin Powell. He makes a brilliant, yet simple, observation: trade isn’t about creating or losing jobs. That’s not what trade does to anyone. Trade is about labor distribution to the best places to get the job done. Steel production is down in the US by 20%… and that’s due in large part to the fact that we can’t produce steel as efficiently as other importers do. Importation of steel is up, however, which also indicates that we have jobs in steel consuming industries that are thriving. Therefore, the strength of the US is not found in steel production, but steel consumption.

Countries don’t trade. People and businesses do. Countries may win in terms of revenue, but the people inevitably lose on both sides. Economies lose. Markets lose. Wealth is lost.

From tax cuts to tariff hikes, what is Trump’s economic […]