From tax cuts to tariff hikes, what is Trump’s economic endgame? 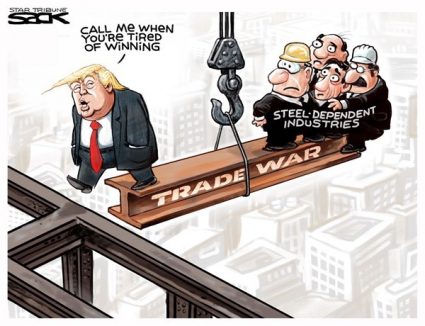 The United States is being pulled in several economic directions under Trump’s administration. I won’t call it “leadership” as that would be overstating things quite a bit. However, while fans of Trump rightly lauded his aggressive corporate tax cuts as being profoundly pro-business, dissidents rightly criticized the lack in spending cuts to accompany that move.

The running theme in Trump’s rhetoric is filled with other people footing the bill. First it was Mexico who was supposed to be paying for the wall… now it’s China who’s meant to fund our welfare state and military industrial complex?

I don’t understand the disconnect of people who cheer tax cuts but also praise tariff hikes, as if they don’t have the same negative impacts on the economy.

Most conservatives require little explanation when it comes to the folly of taxation, but there is a sincere blind spot for tariffs.

It boils down to the fact that anything that could potentially increase the cost of goods and services will do just that, and ultimately will be passed on to the end user.

This all falls under the umbrella of America/Americans first. The tax cuts most certainly meet that criteria. The tariffs however don’t. While the contention is to bring more steel and aluminum jobs back to the US or at the very least keep the numbers we have.

That’s not what ends up happening, however. Steel consumption goes down as does foreign investment. The corporate tax cuts were a fantastic lure for foreign investment, but the tariffs have several corporations a little gun shy:

“This will also have a chilling effect on foreign companies planning to invest in the United States. Several of them have already announced that in response to the expected rise in the metals’ prices, they will put their plans to expand production, build factories and hire workers here on hold. Swedish appliance-maker Electrolux, for instance, announced it is delaying a $250 million investment in America. DowDuPont, the world’s largest chemical company, is considering other countries before it builds another $6 billion steel-intensive factory.”

In fact, when you start to consider all the aluminum and steel based industries that rely on a considerable volume of those resources (the demand for which currently cannot be met by American industry alone), it becomes clear that this is anything BUT pro-American. It might be pro-American steel… but it’s not pro-American jobs:

Jim McGreevy, President and CEO of the trade association The Beer Institute “called the proposed aluminum tariff ‘a new $347.7 million tax on America’s beverage industry’ and warned that imposing those added costs could trigger more than 20,000 in job losses.”

Lest we forget what happened in the not-that-distant past under George W. Bush:

“Did we learn nothing from what happened when President George W. Bush raised steel tariffs? The trade barriers protected 1,000 jobs. But they destroyed 200,000 other jobs. Bush wisely withdrew the tariffs.”

Further analysis offered by ThouhtCo discusses the real costs of “saving jobs”: “In the year 2000 President Bush raised tariffs on imported steel goods between 8 and 30 percent. The Mackinac Center for Public Policy cites a study which indicates that the tariff will reduce U.S. national income by between 0.5 to 1.4 billion dollars. The study estimates that less than 10,000 jobs in the steel industry will be saved by the measure at a cost of over $400,000 per job saved. For every job saved by this measure, 8 will be lost.”

Tariffs were also levied on solar panels and washing machines (of all things). Apparently American manufacturers of both products went crying to Washington about the threats beset by foreign competition. Upset with how other multinationals manage to play off the various benefits afforded to them around the globe to avoid trade laws and restrictions, they sought a tariff that would catch them at the border.

Whirlpool got in a twist over Korean imports of washing machines. So, Trump slaps a tariff on them. Of course, states that are home to Whirlpool production praised this move. But who is really being protected? This might have been a pro-American washing machine manufacturing move, but it was not a pro-American consumer move.

If the competition makes better washing machines out of Korea (such as some LG models and Samsung), why make it more expensive or harder for Americans to get more reliable and better quality appliances? Why doesn’t Whirlpool make a more competitive machine that doesn’t need extra-market interference to protect it?

The plain and simple truth is, economies don’t grow when tariffs are in place: neither country imposing tariffs nor the countries paying them. Often, they not only see no growth, but see net losses. Like helicopter parenting: the kids don’t learn to work it out and grow if the parent is always hovering and handling their business. Yes, the child might be arguable safer, but they are also not improving.

As Petros Mavroidis, an instructor of trade law at Columbia University as well as a consultant to the World Trade Organization, says, “Protectionism leads to more demand for protectionism, and provides companies with the wrong incentives—to demand protections instead of improving their products.”

Trump harps constantly about our “trade deficit”, and we’ve refuted that point on numerous occasions. If in fact Trump wants to see an increase in exports, the LAST thing he should be doing is burning those bridges with tariffs. US goods aren’t particularly cheap to begin with, so having to pay a tariff upon entry at the destination country would only further price US goods out of that market.

The history of tariffs is a grim one. Much like elections, everyone loses except the government. If tariffs are so harmful, why do we keep enacting them? Because if you can’t see the effects immediately, and feel the brunt of that effect, it’s hard to feel vested. For example, Trump can point to actual steel mills and steel industry workers and put a face to the jobs he would be saving. But what’s $400,000 spread out among hundreds of millions of taxpayers? Negligible. Moreover, there’s no knowing at who’s expense that job will be saved. I can’t definitively show you a beer canning employee’s face.

It’s easy to be dismissive of the consequences when their impact is spread over the entire country amortized over time.

But if you were to look at a mortgage while your monthly payments might not be much more than rent, at the end of the 30 years, you will have paid nearly double for your home. When you look at it that way, it has a profound effect on how you look at wealth and consequence distribution schemes, such as tariffs.

With so many unwitting and innocent people getting ensnared in […]