The policies and responses by government when it comes to natural disasters is disastrous! 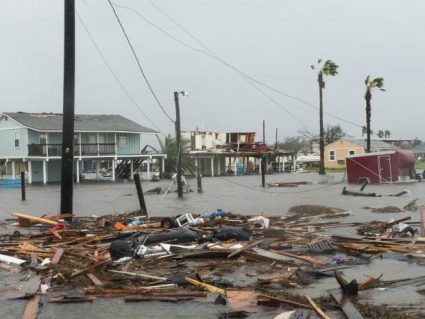 In the wake of natural disasters, government has proven to be the greatest enabler of poor choices, and hindrance to rebuilding and healing.

Look no further than Puerto Rico, who is just recently coming up for air after being hit with Hurricane Jose.   They were already suffering economically, especially their utility company, PREPA:

“Hurricane Maria has dealt a new blow to Puerto Rico’s bankrupt electric company — knocking out power for the entire island and imposing costly repair burdens on a utility that was already struggling with more than $9 billion in debt, poor service and sky-high rates.

“And that means more hardship for local residents and businesses, whose electric rates are already more than twice the national average.

“Even before it was hit by Irma and now Maria, the Puerto Rico Electric Power Authority said it needed more than $4 billion to overhaul its outdated power plants and reduce its heavy reliance on imported oil. The company filed, in effect, for bankruptcy July 2.”

In addition to their lack of funds and structural integrity, they are woefully lacking in staff. Between many retiring and many more emigrating off the island for a better chance at life, the chances of Puerto Rico even having enough skilled labor to rebuild before the next hurricane season seems dismal.

“Puerto Rico’s government owes $74 billion to bondholders, and an additional $50 billion in pension obligations to teachers and almost all other government employees. In May, it filed for the largest municipal bankruptcy in U.S. history.” (Source: CNN Money)

By neglecting maintenance, the rebuild will be that much more costly and take that much more time. Puerto Rico relies on two things that are unsustainable: oil and the US Federal Government. Their dependence on oil for utilities has left them vulnerable to the market prices of crude, and a lot less energy efficient; their reliance on the US Federal Government will likely lead Puerto Rico to become one big island FEMA camp.

Still, the one thing natural disasters bring to Puerto Rico is federal relief. They are eligible for 90% of the costs to rebuild from the US Federal Government:

“There is little in the commonwealth budget for emergencies. The government set aside just $20 million for disaster relief, forcing it to rely on the Trump administration and Federal Emergency Management Agency for funds and manpower. Like other disaster areas, Puerto Rico could qualify for federal assistance through FEMA for up to 90 percent of costs to repair damage.”

It’s a dark prospect to think there are probably some cronies who are looking forward to every natural disaster that comes along because they stand to profit off the federal funding. There’s also little incentive for Puerto Rico to fix or maintain anything since all they need is the cover of natural disaster to get it fixed up! It’s not much different than Federal Flood Insurance: people keep rebuilding in known flood zones because they know they can keep getting money to fix it when it inevitably floods. Why change when you’re immune to market forces or consequences?

Puerto Rico isn’t the only one affected. Florida has seen a good amount of damage, and while Floridians are eager to rebuild, its government has different ambitions.

Florida is aptly called the “Sunshine State”, so it should come as no surprise that a good number of Floridians have solar panels. You must be thinking that those folks are really grateful right now for investing in it because their electricity would be going while those attached to the grid would still be waiting. You would be wrong.

Eleven days after the storm hit, people with solar panels were ALSO still without electricity because the cronies over at Florida Power and Light lobbied that it be made “law” to mandate anyone with solar panels be connected to the grid.

There’s been a standing effort to get powerlines switched to underground. Seems like a good idea right? In a place that has “Hurricane Season”, running power lines underground means less damage to power lines. That too was stonewalled by Florida Power and Light.

Florida Power and Light are as much a “private” corporation as Freddie Mac and the Federal Reserve. They are a monopoly with the full backing of the legislature they pay for.

To add insult to injury, the mayor of Miami had their “safety patrol” out in full effect citing citizens literally six hours after the hurricane passed!

Almost immediately after the storm passed, people who were boarded up in their homes, came out to assess the damage and get to the necessary task of getting things back to where they were. Trees fell down on electrical lines, fences collapsed, streets were flooded. All of which are predictable in the aftermath of a hurricane, especially one as terrible as Irma was.

Imagine the surprise of one Celso Perez, who was paid a visit from the county and cited for a collapsed fence which made it easy to access his pool. The citation was placed on the portion of fence that was still standing.

The problem being: there was still no electricity. It’s not like he could just run down to the hardware store and get the fixings to repair it.

Rather than send city, county, and state employees out to the most affected areas to HELP the residents fix their communities, they were sent out to cite them for obvious storm damage.

“The county stood by their decision to hand out these notices right after Irma.”

They think they are putting safety first and saving lives by doing this! Apparently they think people don’t know their fences are down. Had the county NOT cited them, there would be no effort made to repair them.

Between Federal Flood Insurance, FEMA, and various state and local regulations, natural disasters end up being FAR more economically disastrous than they needed to be.

States dabble in Single Payer Healthcare policies with little regard […]