The US topped twenty trillion dollars in national debt and the Republicans want to cut taxes but not spending. 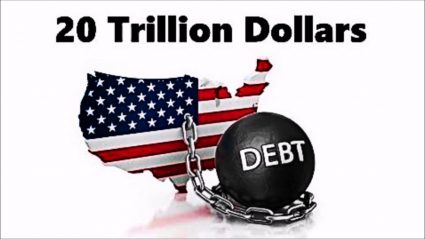 The US just surpassed the twenty trillion dollar debt mark, and there’s little prospect of that turning around.

Republicans who were once very critical of the fiscal condition of the US budget and economy, are now content to offer tax cuts without any cuts to spending to offset it.

I’m all for tax cuts, and to varying degrees economists agree that there is some level of economic stimulus that comes with that. That stimulus won’t offset the out-of-control spending the federal government is responsible for, however.

Twenty trillion is 13 zeros before you see a decimal point. That’s so much money, to expect that any amount of that would be well managed goes beyond wishful thinking and straight into delusional disorders.

Department by department we see money just being wasted. A glitch in the Department of Education? Bailouts from the USDA to commercial farmers? The Pentagon being unable to account for $6.5 trillion dollars? All just another day in the life of American fiscal malfeasance.

The savings can absolutely be found. The 4 year anniversary of Ross Ulbricht’s incarceration was recently marked. 4 years of a DOUBLE LIFE SENTENCE… PLUS 40 YEARS without parole. All this over a series of totally victimless crimes. Not only did no one come forward professing themselves to be a victim of his website, but quite the contrary, hundreds came forward in his defense. That sentence, wasn’t just on Ross, but on the American people in the amount over $1,000,000 in costs.

Ross and countless others like him are serving life sentences without parole for victimless crimes; and while the US debt continues to hike at an unsustainable rate, judges are adding to that tab to make examples of people in the name of what? No one is safer because Ross is rotting away in a jail cell. Any more than we were safer for Chelsea Manning being in a jail cell.

But the checks get cut nonetheless.

Every time the US had a government shut-down or sequester, there is the go-to list of “non-essential federal jobs”. The US knows it’s got non-essential workers, and continues to keep them on the payroll. Why aren’t we taking them out of the debit column, laying them off, and putting them into the credit column by compelling them to work in the private sector?

The reason why there is a bump in economic activity when taxes are cut is the same reason why charitable giving goes up when taxes are cut: people want to spend their money on things they want. People don’t want to go into debt to get what they want. So they would pay down their debts, buy what they want or need, and likely save the rest (which is the stage where the stimulus tapers off).

The stimulus the US would see is a natural expansion from the contracted state they are in now. Much like when you come up from underwater after several minutes and draw that first breath.

“Since 2013 it has equaled or exceeded GDP, which had not been seen since the end of World War II.” (Source: Pew Research)

When debt equals or exceeds GDP, as has been the case for the past 4 years in the United States, we have what is called a “debt overhang”. Economic growth could contract to as low as 1.9% year over year.

The two largest creditors that the US Federal Government owes money to? China? Japan? Nope. Those are the two largest foreign benefactors. The largest creditors of the US debt is in fact the US. The two trust funds of Social Security holds approximately 14.7% of the total debt, while the Federal Reserve holds 12.4%. This is what is called monetization of debt. We basically took debt and made it into money. Over a quarter of the debt is to these two entities.

Nearly 7% of the federal budget goes to servicing this debt. Put another way, 7 cents of every tax dollar goes just to servicing a debt you had no part in creating.

“The interest payments alone on U.S. debt are going to triple in the next decade, according to the CBO. That’s before adding an additional $1.5 trillion in debt.” (Source: Washington Post)

This is what the US has to look forward to if Congress doesn’t offset the tax cuts with spending cuts. Their emphasis will be on buying US treasuries and bonds to services the debt, rather than investing money into start-ups or real economic stimulators.

Money MUST be freed up. Not just in the form of tax relief, but in the form of spending cuts. Elimination of the USPS would make astounding sense given that there are already plenty of alternatives that currently overprice their letter services out of legal obligation to NOT directly compete with the USPS in the first place.

Defunding the war on drugs would be another, in combination with only incarcerating those who pose a direct threat to the safety of individuals and/or their property. Already, the House has taken a step in this direction by defunding the expansion of the asset forfeiture program set forth by Jeff Sessions.

There are areas Congress could cut in its budget that would never be missed by the American people. Finding $2 trillion per year isn’t difficult at all.

With a quick google search, I managed to save just over $100 billion in federal spending in five bullet points. Stop thinking something is too small to bother with. It’s never too small. It all adds up. I believe another $100 billion could easily be cut from defense spending that would never be missed.

If we cut the regulatory regime in half, we’d have half the German GDP circulating in the US economy again!

Annual spending in the US is approximately $4 trillion per year, running at about a 10% deficit. It’s not sustainable, as Venezuela and Zimbabwe have clearly demonstrated. I’m not entirely sure if the ship’s course can be corrected at this point or if the iceberg is just an inevitability, but being fiscally responsible only poses a threat to the impending consequences of continuing this course. If it can mitigate the impact or prevent it entirely, it’s worth trying right?

The policies and responses by government when it comes to […]