The education bubble has been expanding year over year, while the Department of Education was having some “technical problems” with their reporting. 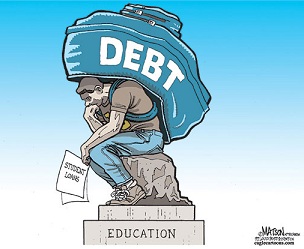 The education bubble hasn’t gone anywhere. We’ve written about this a few times before (“Government: Over Promises and Under Delivers” and “Tuition Bubble”) , and for some reason we were left with the very false understanding that everything was well in hand thanks to Obama’s Income Driven Repayment plan. In fact, it turns out, due to some “technical difficulties” at the Department of Education during the Obama administration, it’s considerably worse than originally thought.

Those technical difficulties just HAPPENED to paint a far more favorable picture for the outgoing administration than what was actually happening. The GAO (Government Accountability Office) admonished the Department of Education for this, and provided a list of recommendations largely calling out the egregious miss on forecasted government costs.

In order to fully understand what all is going on here, it’s important to know what the IDR, or Income Driven Repayment program, is. Here is the GAO’s take:

“IDR plans are designed to help ease student debt burden by setting loan payments as a percentage of borrower income, extending repayment periods from the standard 10 years to up to 25 years, and forgiving remaining balances at the end of that period.”

But here’s a more detailed explanation from the Wall Street Journal:

“The most generous version of income-driven repayments caps a borrower’s monthly payment at 10 percent of discretionary income, which is defined as adjusted gross income above 150 percent of the poverty level. That formula typically lowers monthly payments of borrowers by hundreds of dollars. Public-service workers—those employed by a government agency or at most nonprofits—have balances forgiven after 10 years, tax-free. Private-sector workers have balances forgiven in 20 or 25 years, with the forgiven amount taxed as ordinary income.”

Forgiving loans after 10 years tax free if the borrower goes into some line of government work; while forgiving private sector borrowers after 20-25 years and taxing the forgiven amount? First off, if the incentive was to mitigate government cost, wouldn’t it make sense to flip the incentive around and offer the 10 year tax free forgiveness to the private sector producer rather than the public sector leech? But second, regardless of incentives, it is rather obvious how this plan could only operate at a loss, right?

Here’s the grim truth about student loan debts and arrears as Zerohedge points out:

It’s not that students are just falling behind or making smaller payments, it’s that they aren’t paying anything at all: “[A]t more than 1,000 colleges and trade schools, or about a quarter of the total, at least half the students had defaulted or failed to pay down at least $1 on their debt within seven years.”

Despite the revisions over the past several years to the numbers, “no college saw its repayment rate improve under the revision, and some schools saw their seven-year repayment rates fall by as much as 29 percent.”

With the latest loan total number over $1.4 trillion, rising at a nearly $100 billion per year clip, it’s no secret that the student loan bubble is reaching critical mass. After all, we were warned back in December of 2014: “The Treasury Borrowing Advisory Committee forecast that in an aggressive scenario, as much as $3.3 trillion in student loans could be outstanding by 2024”.

We have two things at play here: reckless lending and reckless borrowing. Someone needs to be the responsible grown up here. Unfortunately, like most economic bubbles of this magnitude, the ones who shoulder the consequences aren’t the borrowers or the lenders, but everyone else: also known as the Taxpayer.

The inflation of the tuition price-tag is explained very simply: readily available money. If the government decided tomorrow to cut off all student lending programs, the cost of education would have to go down. Universities both private and public would have to resort to better business practices.

The quality of education itself isn’t better or improved since I attended, and certainly isn’t commensurate to the hike in price. The value of a degree hasn’t gone up either. In fact, it’s depreciated in value.

I see several articles arguing that people with degrees aren’t REALLY underemployed. Approximately 45% of recent grads are simply working jobs that probably didn’t require a degree in the first place. Which says what about the degree then? Even if underemployed wrongly includes occupations that didn’t require a degree, how do these people reconcile the gross arears in student loan repayment by college grads? If in fact they are making a decent living and aren’t actually underemployed, then why the increase in defaults?

Something has to give. Regardless, people are going to pay.

It’s not like you aren’t already continuously bailing out industries already. The Big Agricultural industry is the proud recipient of $14 billion in 2016 with a projection of $19 billion this year according to the Congressional Budget Office. All this in order to manipulate the price of various agricultural goods we produce here in the US.

It is important to stop people from claiming this is a free market. When we aren’t even free to set the value of cheese in this country, much less stop propping up the value of labor and universities artificially through regulation and “free” money, it is unacceptable for anyone to call the United States a “capitalist” country based on “free market” principles. It most certainly is NOT.

More importantly, however, this bubble can only grow for so long. If you plan to be here for the burst, prepare yourselves and protect your assets.

Obama's economy is Trump's inheritance; so what sort of economic […]