Obama’s economy is Trump’s inheritance; so what sort of economic policy are we in for? 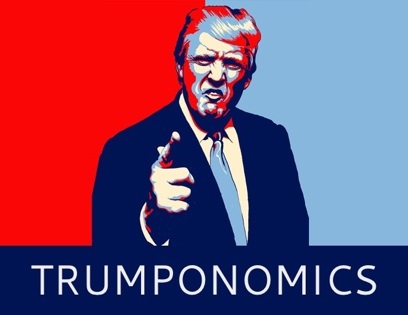 Trump, like the 44 presidents before him, has inherited the American economy. It’s time to learn what HIS economic policy really is and what it will boil down to.

Obama admittedly inherited a messy economy from Bush. And while every president inherits some modicum of slop from their predecessors, Obama inherited a recession, while Bush inherited a surplus.

Less than a year after Obama took office, the recession was declared over, and despite that, he has underdelivered on his economic growth every single year of his presidency. We never once saw or came close to 3% growth, despite the administration’s optimism. Overall, Obama was just a slightly lower plateau than his predecessor. For as much as the left loves to criticize Bush, Obama only served to drag out that presidency when all was said and done.

One thing is for sure: we cannot blame Bush for Obama’s shortcomings any more. He had his own presidency and it must stand on its own like every other. There are a few other accessories that Obama put onto our economy:

For better or for worse, this is Trump’s inheritance, and he is tasked with making this better.

The editorial staff of Investors’ Business Daily posits: “If Trump does nothing more than cut taxes and drastically simplify the tax code, eliminate needlessly oppressive regulations, delete ObamaCare, and reform Dodd-Frank — and assuming he doesn’t set off a destructive trade war — we are confident that the economy will vastly outperform the tepid pace of the past eight years.”

What’s it called when you have every card you need for a full house except that middle one? Because that might be exactly the hand Trump is playing. His trade and immigration policies are incredibly short-sighted and might very well undermine all the other positive actions he’s taking to help the US economy.

Halting and rolling back regulations? BRILLIANT!

20% tariff on imports? Huh? Tho Bishop at the Mises Institute writes in regard to this tarrif:

“American producers who use food, vehicles, electronics, and medical instruments imported from Mexico (such as restaurants, couriers, medical firms, and any company that uses automobiles) will now have higher costs and will be able to produce less, hire fewer people, in order to sell at the same low prices. American consumers and workers will suffer accordingly. The only ones who benefit will be the tiny minority of Americans who compete with Mexicans for manufacturing jobs, and those who sell to them.”

The purpose of Trump’s tariff is to encourage more manufacturing jobs in the US. But does he have any idea the costs of setting up the factories in the US? The outlay for zoning, real estate, equipment, adhering to the various regulations, union wages and benefits?

This tariff is a glorified “sin tax”. It’s a means of trying to deter a certain behavior or choice and replace it with a better one. But it will ultimately be more regressive. When one state imposes taxes on soda, cigarettes, or alcohol, it might affect the behavior of moderate users a little, but heavy users are going to find another way. That’s how black markets are born. There are even an examples of a schools banning soda, and a kids selling sodas to other kids on the sly. The market will look for a correction.

But what will that correction look like in the United States? Taxes don’t simply discourage a behavior, they give birth to alternate behaviors. In the case of sin taxes like the ones on cigarettes, it hits the poor the hardest. Could an import tax – or tariff — ultimately have the same effect on America’s poor?

Cheap imports sold at cheap prices are like cheap labor: it anchors the cost of goods and services. You can’t be for lower prices while opposing deflationary practices! You gotta pick a side.

There is a term in economics called “comparative advantage”. It is what makes free trade a win-win for all parties. The term specifically addresses efficiencies gained in opportunity costs, or as it is commonly said, “Playing to your strengths”. Comparative advantage is the greatest gain in trade for all parties because opportunity costs are reduced on both ends. Here’s a wonderful example offered by Investopedia:

“China’s comparative advantage with the United States is in the form of cheap labor. Chinese workers produce simple consumer goods at a much lower opportunity cost. The United States’ comparative advantage is in specialized, capital-intensive labor. American workers produce sophisticated goods or investment opportunities at lower opportunity costs. Specializing and trading along these lines benefits each.”

If Trump were to truly harness this aspect, we’d be in fantastic shape!

I’m fearful that this sort of distortion and manipulation will hurt the working class and poor most. The poor rely on inexpensive imports. They have done wonders to improve the quality of life for many struggling Americans. To either be denied those products at market value or compelled to find an American alternative is cruel, to say the least. The working class rely on jobs linked to imports. To say that American manufacturers are going to fill that void in the same way is borderline imaginary. This goes back to my earlier point of how expensive it is to set this sort of industry up in the US to begin with.

Ultimately, Mexico will not be paying for the wall. Americans will. Not rich Americans, but the struggling ones. We are ushering in another blow to the middle class, unfortunately.

We need to be more extroverted and eager toward trade, and more isolationist and reserved with our foreign policy. Unfortunately, we have it completely backwards.