The path toward MAGA doesn’t seem to be very “great”. 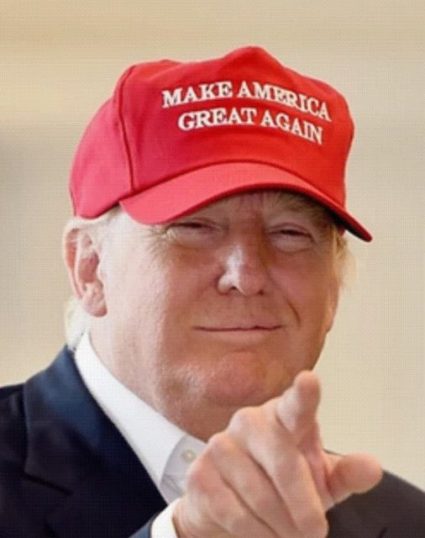 Donald Trump ran on the promise of MAGA (Making America Great Again). While I may be very cynical toward the United States today, I don’t deny that there were several great aspects of the American experiment that I wouldn’t mind bringing back.

But it’s clear that MAGA is the “Hope and Change” of the Republican Party. It’s really whatever you want to project upon it. You want it to be an audit of the Federal Reserve and a return to the Constitution? *POOF* Then that’s what it is! Customization of your confirmation biases are what American politics are all about!

One eighth of his four-year term has passed and this is what has happened:

Thus far, I’m not seeing much difference between Bush, Obama, or Trump. Each candidate tries to run out of the gate with the sole intention of differentiating themselves from their predecessor… especially if said predecessor happens to be from the opposing party.

Breaking his campaign promise of avoiding a Syrian conflict, and doing so with ruthless efficiency, apparently was his way of sticking it to the Obama Administration. So much so that former Obama and Hillary staffers are lauding his brazen response in Syria.

He’s also stirring the pot with Iran and Russia. His administration recertified Iran’s compliance with the 2015 nuclear deal; but that didn’t stop him from issuing new sanctions on the country just the same. The Republican Congress, in the meantime, is conjuring up new sanctions for Russia.

The one glaring thing Trump had going in his favor is: he wasn’t responsible for the death of innocents… unlike his opponent, Hilary Clinton. Well, that can no longer be said.

“Nearly as many Iraqi and Syrian civilians have died in US-led air strikes under Donald Trump as were killed during the whole administration of Barack Obama, independent analysts say.” (Source: Independent)

The well-intended Trump wanted to slash corporate taxes down to the global average of 15%; and for that I commend him. He relies on the Republicans to push “reconciliation” so the odds of it getting pushed through are not great. Of course, I’m always pulling for lower taxes for all, so if they can pull it off, that would be fantastic!

What I would like to know is what does Trump plan to do about the overzealous IRS’ behavior toward his national constituency? It’s one thing to say you’re changing the tax policies and codes. It’s another to still have a band of thugs out there harassing individuals and small businesses.

A recent story out of Texas shows the IRS swooping into a small bridal shop; and based on the allegations that this couple owed over $31,000 in taxes (no due process, just an allegation), they seized their shop and sold off their existing assets – valued at over $600,000 – for just over $17,000. According to the Dallas News, they executed on a “special rule” that allows for an expedited sale of goods.

I want to say this is a one-off or a fluke, but it’s not. It’s part of a larger trend based on some aggressive targeting of “tax evaders and money launderers”.

“The IRS’s own internal watchdog found that the IRS had a practice of seizing entire bank accounts based on nothing more than a pattern of under-$10,000 cash deposits,” said lawyer Robert Everett Johnson, an attorney at the Institute for Justice. 91% of a random sampling of those caught up in the IRS dragnet were found to be innocent of any wrong-doing.

Perhaps part of the MAGA plan should include a reversion back to DUE PROCESS? And a presumption of innocence until the burden of proof of guilt is properly met? I mean, this is just me brainstorming here…

He has made significant cuts in regulations (*applause*); but federal spending is going up (*perplexed looks*). The expected outcome of any “cut” is a respective cut to the costs associated with it. However, in Trump’s world, things apparently operate a little differently.

He cut Medicaid spending. Hear the media tell it, he’s “slashing” Medicaid. Yet, under Trump’s budget, Medicaid spending takes a 38% upward turn over 10 years. “Under his budget proposal, Medicaid spending would rise from $378 billion this year to $524 billion in 2027. That’s a 38 percent nominal increase.” (Source: Reason)

The same is true for Medicare spending. “Slashed” that too, yet it is set to rise considerably. “Under the current baseline, Medicare would grow from $593 billion to $1.19 trillion. Under the Trump budget, it would grow to only (!) $1.16 trillion.” (Source: Reason)

Same goes for regulatory cuts. He made quite a few, but basically redirected that funding and then some to the Department of Homeland Security. So in the end, he’s hiking regulatory spending at rates faster than Obama’s last year in office.

I know that the rest of the world is seen as one big rent-seeking terrorist organization, and the United States is the last bastion of peace and free markets (yeah right), but the wall has to be one of the most stupid populist proposals I’ve heard yet. It’s just an expensive symbol of a half-baked fear-based sentiment. Like anything else that is part of American Safety Theater, the ROI on that is right up there with the TSA.

But the wall is to Trump as ACA was to Obama and this boondoggle is bound to be enacted come hook or by crook. Can’t cut taxes without jumping through hoops, but we sure can spend money in the blink of an eye.

So how are we going to pay for it? Well, first it was “Mexico is gonna pay for it!” Rah! Rah! Then it was Americans would pay for it initially, but be reimbursed later (Totally believable.). Then it was a border tax on Mexico.

Now it’s a 2% tax on the transfer of wealth south of the border. If you are an American citizen, and your child is studying abroad in Chile, and calls you for emergency funds, you’re paying 2% on that transfer for the wall. If you are stranded on a Mexican vacation, and need friends to wire you some cash until you can get home, 2%. OH! Wait… did you think that this was somehow going to be paid for by someone other than Americans? That’s adorable. No. It’s going to be paid for by anyone who happens to want to send money south of the US border.

Consider it a vice tax. Government doesn’t like you smoking or drinking, so they impose a tax on it to deter you from drinking or smoking. Government doesn’t like you smoking weed so rather than prohibition, it just makes money off your vices.  The green agenda operates this way: they create all these regulations, but then want businesses to PAY their way out of them.

Government doesn’t like you sending money outside Murica, so it’s going to profit off that too. But here’s the the thing: the pet project associated with this tax is clear. Which means they don’t want you to STOP wiring money south of the border… they NEED you to do it in order to pay for the wall! So yes, they shame you for sending money offshore, but really they think you should keep on doing what you’re doing.

Just when you think it can’t get any stupider, it does. My entire business is predicated on expatriation and immigration of assets, business, and person. You’ll have to pardon me if I don’t join the masses in turning the US into a great big open air prision.

And all this is supposed to represent GREATNESS? This is what GREATNESS means? The US will revert to the once great era of what? Rome?

A roided out police state, picking more international fights, and paying for a stupid wall in the most hypocritical manner possible? Not what I envisioned as MAGA at all.