People suggesting a universal income and 100% inheritance tax are out there, and aren’t being ignored entirely. 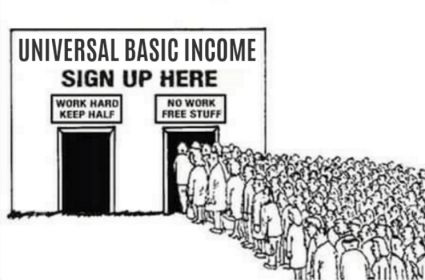 A 100% inheritance tax and a universal basic income have to be the most preposterous escalations of welfare I’ve heard! That they aren’t being laughed out of the room, but rather that such proposals are being taken to heart quite seriously, is rather disheartening to say the very least.

The idea that everyone is simultaneously entitled to an income, while not entitled to all of what they earn or save is so economically broken, I’m struggling to figure out where to begin!

The universal income doesn’t sound like much more than a tax refund for those who pay in, and a discretionary check to those who don’t. The difference being, there’s no threat of losing your check even if you find a way out of unemployment or poverty.

One of the unintended consequences of raising the minimum wage in Seattle was that people stopped working as much because the new wages threatened their eligibility for certain programs. Alternatively, the higher wage lead to the cutting of their hours and left them with the same income they were making before the hike. Either way, it helped no one.

If your welfare programs are structured in such a way that they there is no incentive to get off the dole, that unto itself is very problematic.

An example of universal income that is being heralded as successful is that of Alaska’s sharing in oil royalties. A law was written into the Alaska constitution back in 1976 that entitles all Alaskan residents a share of the royalties made off the oil that state produces and sells. But that’s not the same as a universal income. It’s not a fixed amount. And it is a benefit of residency rather than something people necessarily rely on as a source of income. Alaskans know good and well that some years are better or worse than others. It also comes out to something like $900 to $1800 per year… no exactly enough to live off of.

The amounts are contingent upon the appreciation of a fund, and varies based on that factor. Moreover, the money being paid out is passive income on an existing fund created by that state. It’s not just the taxes collected from others paying for fixed income checks.

Many Arab nations run on something similar: they have no income tax because their oil sales pay for the basic functions of their governments. But oil is a good or service being bought and sold; so at the very least, the government is funded by one monopoly, while the constituents live tax free. But that’s not the same as a guaranteed universal income. It’s not an income to not be taxed. That’s like calling the cancellation of your cable service a raise! It’s not. It’s money not spent or taken out of your actual earnings.

Finland is one of the first countries to take seriously the idea of a universal income of sorts. They have an elaborate and expensive welfare state, so to mitigate costs, they are experimenting with a universal income. It’s not achieved universal levels yet as it’s still in the experimental stages of 2,000 randomly selected recipients.

The working theory is, if people were guaranteed a monthly stipend from the state, regardless of income, they would be more inclined to work. That is to say, they would seek and keep employment if they knew there was no threat of losing the stipend.

If their theory is true, that more people will work and less people will need as much, then they will expand it.

The question which has yet to be asked and answered is: what would happen, and how would they behave if there was no welfare state at all? A better experiment with the likely outcome being that people will be less particular about taking a job, with the obvious incentive of feeding themselves.

How elaborate exactly is their welfare system, that cutting everyone a check for just over $500 USD per month makes more sense and saves more money? Maybe just cut taxes in that amount? On the one hand they have this problem of an over-burdened and bloated welfare state, on the other they thought it would cut down on this by having a bureaucracy collect the taxes only to have another bureaucracy process a $500 pay out? How about just calculate taxes… and then at the end have one more line item that subtracts $500?

Meanwhile, a similar referendum came up for a vote in Switzerland and about three quarters of the voting public shot it down.

Economist, Walter Williams, made an observation about organ donation (at around minute 6:40 on this video) that is very apropos here. I’m paraphrasing here, but it does seem a bit out of line that the only person not being compensated for organ donation is the donor himself!

Those who harvest, store, and transport the organs are paid for doing exactly that. The doctor who performs the transplant is paid handsomely. The hospital where it all happens is compensated. The recipient is given a new viable organ and gets to live longer.

But the donor… *crickets*

Even worse, when donors are compensated, it’s criminal. How crazy is that? So someone either has to donate their kidney for free, or not at all?

But imagine if people and estates were paid for organs that were donated. Another incentive is added to perhaps making healthier choices. If you knew that healthy kidneys could fetch a certain amount, eyes another amount, pancreas another, heart another… your estate could be worth a decent amount.

If there isn’t anything to be had, then organ donation doesn’t have much of an incentive to it. Neither for the donor or their survivors. It’s not to say that people don’t donate anyway, but there are plenty of people who might reconsider donating a kidney now rather than when they die if they thought they could fetch a couple grand for it. There might be people who would consider going out of their way to become a donor if they knew it would fetch some money.

Now imagine that we were talking about an inheritance rather than organs. If you know that you can’t leave any of it to anyone, why bother holding on to it right? The alternative is to give it all away prior to death… But here’s the real rub: why does each generation have to start over? Why can’t each generation build on the one prior?

Here are a few arguments put forth by Abi Wilkinson:

“Morally speaking, people who stand to inherit large sums haven’t done anything to earn that money. An accident of birth placed them in a comparatively wealthy family and they’ve benefited from that their whole life.”

First off, this point isn’t being argued from a place of morality. Inheritance is a legitimate transfer of property. It is tantamount to a gift. As such, it is absolutely 100% moral to receive a gift… of any size or quantity. Second of all, being born in a first world country is also an accident of birth, but I’m not going to feel guilty and pay out to assuage my “privilege”. Being born in a first world country was no more earned than the quality of life you were afforded by your family.

There are plenty of serendipitous things that happen in many people’s lives… Finding $20 on the floor while walking out of a grocery store… winning a lottery or picking a good horse at the track… speculating well and having a stock you invest in take-off. These are all things that happen that can lead to wealth.

Perhaps the beneficiaries did do something to earn the inheritance. There might have been various stipulations to the inheritance. But it doesn’t matter because it’s not anyone else’s money to decide one way or another.

“There’s some value in respecting the wishes of the dead, yes, but why is that more important than social housing, healthcare or any number of other possible uses for the money? It’s natural to want to protect and care for your family, but what about people who don’t stand to inherit a penny? Is there any reason their needs should matter less?”

It’s not the wishes of the dead. It’s the wishes of the NOW deceased that were noted when they were alive and of sound mind. It’s more important than all those altruistic things because individuals have a right to their own property and how it should be handled; individuals don’t have a right to social housing, healthcare, and any number of things at the expense of others: dead or alive.

It is not the burden of the dying or the dead, to take care of random indigent strangers they’ve never met. They might not even feel obligated to help their own family members after they pass! It could be they leave their entire estate to some local animal rescue shelter. It could be that they leave everything to a kind neighbor who took care of them when their family didn’t.

Is there any reason the needs of strangers should matter less than the wishes of the dying? Yes. The wishes of the dying as it pertains to their wealth is all that matters. They are the rightful owners of that property. If they find solace in knowing their families are taken care of, then they afforded themselves that privilege.

All this is absolutely bananas. But what’s sad is that Belgium currently is the title holder for the highest death tax in the world weighing in at 80%! So they aren’t far from ringing that bell at the top of the rope in gym class.

I don’t know if any of this is coming to a government near you. I am saying we don’t all live in Switzerland where 100% inheritance taxes and universal incomes are rejected with healthy margins. These are just some of the reasons why protecting your wealth, your estate, and any assets of value are of the utmost importance.

You shouldn’t have governments deciding what’s best for your wealth and assets. If in fact you want to leave everything to a charity, by all means, do it. But the last thing any dying person needs is the government doing vulture circles over their bank accounts waiting for them to draw their last breath, knowing everything they have will be redistributed to people they never intended to give it to.

The path toward MAGA doesn’t seem to be very “great”. […]