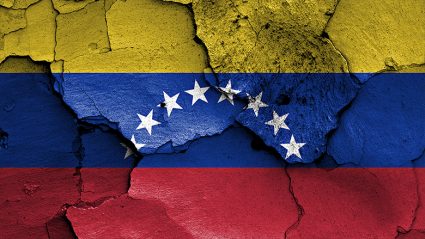 Venezuela’s economic collapse is consistent with every other socialist experiment. When crude was high and Venezuela was at its prime, all the socialists came out to celebrate and hail it as a successful socialist experiment and a palpable check-mate to critics.

We’ve been following Venezuela and while there was a time when Venezuela was on top of the world, it was its “nationalization of industries, price controls, a gigantic welfare state, oppressive taxation, and pervasive regulation of economic life” that has landed it where it is today.

Just when I don’t think the desperation could get any thicker, it does. The video footage that is being released revealing the tragedy in the streets is heartbreaking. Lines, rationing, food lotteries, and rioting is common place.

According to the Guardian, the political line being towed is that “Venezuela is the victim of an ‘economic war’ waged by Colombian gangs, multinational corporations and financial institutions, who hoard goods, manipulate currency rates and smuggle contraband oil across the border”.

But if that were true then we’d see the same things happening in Russia. Russia also took a hit when oil prices fell. Russia has corruption in its ranks, much like Venezuela.  They have economic sanctions against them. Yet they are managing. I’m not saying they’re soaring, but they are by NO means seeing the same destitution as Venezuela.

Russia is doing something that Venezuela isn’t: they are finding alternate solutions to their economic situation other than pointing fingers and blaming others. They have intensified their partnership with China, for one thing. They aren’t making their problems about class warfare, they are taking their place in the market playing field.

Meanwhile, Nicolas Maduro is looking at approval ratings below that of even Donald Trump, often dipping into the single digits! And his weakness as a leader is clearer as Venezuela becomes more of a military junta than a democratic paragon:

“Meanwhile the army – a powerful political force throughout Venezuela’s history – is growing increasingly influential. In July, General Padrino López was placed in charge of food production and distribution. As chief of the “great mission of sovereign supply”, all other ministers must answer to him.”

What is particularly unnerving is the glare that the more affluent in Venezuela are getting during this time. THEY can still afford nice things like peas and corn, or chocolates and Champaign, while the poor are waiting in line for what’s left. The poor are even being paid by the affluent to wait in line for them! The image should be enough to want blame those who have more, assuming you don’t stop to think this through.

The truth is, all this well-intended socialism seems to have hurt the poor the most. Wasn’t the whole point to lift the poor? Equalize the economy? And yet the hardest hit were the ones who were already deep in the struggle to begin with.

There is no 100% free market country in the world. But there are freer markets than others. And that margin of freedom has measurable benefits worth considering before jumping on the socialist bandwagon.  According to HumanProgress.org:

Hyperinflation, malnutrition, shortages, and violence all come in various doses throughout the country.

Despite inflation and the lack of infrastructure needed to facilitate commerce digitally throughout the country, the government decided to ban its highest denomination of currency: the 100 Bolivar. So picture the Weimar Republic, only south of the equator. Or imagine trying to pay your weekly groceries in denominations of dimes or smaller. If the average couple spends $100 per week on groceries, the amount of time everyone from consumer to proprietor is spending just COUNTING money has to be outrageous!

“The government’s tendency to subsidize many products below the cost of production is a major reason why the economy is in such a mess.” (Source: The Guardian)

This is also why you can get oil cheaper than water in Venezuela. Oil is so heavily subsidized, it’s more affordable to throw the family into the car and drive to the Brazilian border and back than it is to provide them all with clean water.

This is the exact same reason why fertile farmland remains empty, and oil production has plummeted in Venezuela. Evil as the profit incentive is made out to be, it was the grease of the machine that kept essential goods and services flowing through the country. As it turns out, not many want to drill or farm for free; and even less want to do it at a loss.

The shortages in Venezuela are a direct result of price fixing by the government. The stated purpose is to ensure that basic needs are affordable so people aren’t making nasty profits off other people’s need to eat!!! What ended up happening is the producers stopped producing as there was more profit to be had running a side hustle waiting in line and reselling goods than just taking the insufficient pittance the government offered.

The reason why I post so much about this, is to bring awareness. Not just about what is happening in other areas of the world, but what might be happening slowly in your neck of the woods. The government rigging industries like agriculture, dairy, healthcare, education, energy, and even functions of the market like interest rates and wages is dangerous business.

I get that no one wants to see people suffer, but centralization has consistently lead to disaster. That isn’t the solution. That is the new and greater problem.

People suggesting a universal income and 100% inheritance tax are […]