There is a serious housing crisis happening in many cities around the world. But the solution is a respect for property rights, not higher taxes or more money. 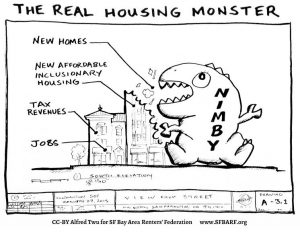 When I balk at taxes, the first line of defense is always something with the greatest utility like roads. No one ever brings up cronyism and pocket lining, prohibitionist policies, and war. Why would they? It’s damning. Why aren’t people talking about how money is thrown at problems the way a rich dad tries to make his troubled son’s problems “disappear”?

One of the big issues is homelessness. If you recall, Seattle tried to push through a “head tax” that was supposed to help the city’s homeless.

“The city’s initial plan was for the tax to collect about $500 per employee a year. Amazon responded in early May by stopping its expansion in the city “pending the outcome of the head tax vote.” That was sufficient to get the tax knocked down to about $275 per employee and scaled back in other ways. The tax was limited to companies with at least $20 million in revenue a year.”

It was almost immediately overturned because Amazon, the city’s largest employer, expressed some serious acrimony toward that saying Seattle has a spending efficiency problem.

They aren’t wrong. Homelessness isn’t caused by large businesses setting up shop and creating demand for property. Homelessness is caused by insufficient supply of property. You can see this in Hong Kong, but you won’t see this in Tokyo. Why? Because when the state controls supply, people suffer. Tokyo is about twice the size of Hong Kong with roughly twice the population. But Tokyo keeps its property values relatively flat, while people are paying through the nose for a veritable shoebox in Hong Kong.

San Francisco has 18,443 people per square mile population density, while Tokyo has 14,339 per square mile. Not a remarkable difference, and certainly not a difference warranting such a huge disparity in property values.

Part of San Francisco is already built on landfills so real estate expansion isn’t really an issue insofar as simply growing the square mileage of the city. But what happens when developers try to go in and create more supply to meet demand? Activists demand an evaluation on the environmental and CULTURAL aspects of the city! I think they are likely referring to that nasty thing known as “gentrification”.

Axis tried to go into San Francisco and build more housing and were met with exactly that:

“Eventually tiring of fighting activist demands and endless environmental appeals, Axis agreed in May 2018 to increase the number of below-market units from 17 to 31 (23 of them in the new apartment building on Folsom, the other eight elsewhere in the city), rent 5,200 square feet of what would have been commercial retail space to a community nonprofit for a $1 a year for 55 years (which represents a huge amount of forgone revenue), and use all union labor for construction. These concessions brought activists and local politicians around, and Axis got permission to build shortly afterward. But the conditions made the project uneconomical, and Axis found it was cheaper to just sell the land.”

San Francisco wants to follow in Seattle’s footsteps and just passed a measure to tax high grossing employers 0.05% on their revenues. Not their profits… their revenues. So, before they make payroll or pay their light bills or even their rent, they need to pay the city of San Francisco to fix the homeless problem.

“Proposition C would raise up to $300 million a year, nearly doubling the city’s current annual $380 million spending to combat homelessness, from a total city budget of $10 billion.

“The measure would levy the tax mostly by revenue rather than by number of employees — an average half-percent tax increase on companies’ revenue above $50 million each year.”

The problem isn’t financial though. It has nothing to do with money. It has to do with value, and value goes back to supply and demand. Ralph McLaughlin, an economist for Trulia, offered up the following findings with regards to building and expansion:

“With an estimated early 2017 population of nearly 1.64 million, SF and San Mateo counties will issue one permit per 358 or so residents this year, if McLaughlin’s predictions hold true.

Compare this to Austin, Texas, which comes in first on the Trulia rankings for permit performance. The larger Austin metro area has just over 2 million people, and McLaughlin anticipates 29,872 permits, one per 67 residents or so.

On the other hand, San Jose’s larger Santa Clara County area has some 1.9 million residents and 9,224 projected permits. That’s one per every 205 people—not Texas numbers, but still enough to beat out its neighbors to the north handily.”

Paying more taxes to supposedly help the homeless stands no chance of actually helping the homeless since that doesn’t create more housing. More housing has been offered and fought off by council members and city planners time and again.

They are calling this the “perils of prosperity”. What a load of bunk. Cities like San Francisco and Seattle woo these large corporations to come or stay in their cities to bring jobs and prestige, but fail to provide the infrastructure needed to handle that prosperity? Then have the audacity to say these businesses created these problems and should bare the financial responsibility of fixing them?

Proposition C came highly endorsed by CEO of Salesforce.com Marc Benioff, but with no endorsement from the mayor, London Breed, and staunch opposition from Twitter CEO Jack Dorsey. The mayor is a Democrat and opposed this because it lacked accountability and consensus.

Opponents of the measure say the vote failed to get the two-thirds needed to ever see a dime of that tax money. Why? Let me preface this by saying I have NO idea how this proposition passed in California, BUT: Proposition 26 was based in November 2010 and is an amendment to the California State Constitution which requires a supermajority of two thirds vote to pass ANY increase or additional fees, taxes, or levies.

It’s unclear if this supermajority requirement applies to both citizen and elected official initiatives, but we will soon find out. A separate Proposition C passed in June 2018 leveled a commercial rent tax on landlords to pay for Childcare and Early Education.

In the end, the issue of homelessness shouldn’t come down to legal technicalities. It should come down to private property rights, and the respect thereof. So long as government controls property rights, you will have housing crises like you see in Hong Kong, San Francisco, New York, and Los Angeles. And no amount of taxes and money is going to fix a problem that is logistical at its very core. The sooner city planners and officials understand this, the sooner affordable housing can make its way back into these overcrowded cities.

Election season is upon the USA, and it has become […]