Year over year the fiscal disasters throughout the government make it painfully obvious it is too big and really doesn’t know better than the private sector. 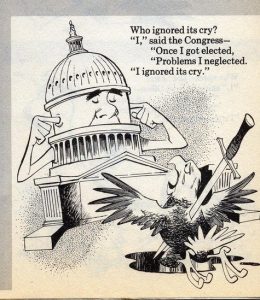 I think it’s remarkable how people can watch the blatant malfeasance of government manifest itself before their very eyes, and still call on government to fix it.

Before considering allowing government to continue controlling matters NOT designated to it, perhaps a brief look at how they handle their actual responsibilities is in order.

As you might recall, the Pentagon was set to undergo its first EVER audit this month. We wrote about it in January of this year, but it actually STARTED in December of 2017.

One year, 2,400 auditors, and $367 million later they failed. They expected to fail. And the failure is going to cost another estimated $551 million to fix!

The fact that they expected to fail says something right? That this department of the government has been dodging audits for decades, but expected to fail its first audit, means they knew they were being mismanaged.

To read the commentary from the Pentagon about this is quite amusing. Deputy Secretary of Defense, Patrick Shanahan had this to say:

Details of the audit will be released soon, but for now, all this posturing indicates one major problem… a problem, that if fixed, would solve a lot of the other smaller issues: The DoD is too big! The excuses that punted this audit down the line over 20 years is exactly that: The DoD is too big for an audit.

A regrettable service to delegate to the government. Lysander Spooner knew it and we know it today.

Spooner was no joke. His “American Letter Mail Company” ultimately went out of business due to the government bullying, but he also got them to come down from 12 cents per letter to 3 cents.

Yet here they are $4 Billion in the red “a whopping 44 percent increase in losses from the previous year, despite the fact that the post office saw revenue increase by more than $1 billion at the same time”.

The USPS, true to government tradition, manages to realize a 1.5% increase in overall revenue and still suffer a greater loss than the year before.

The problem is their $13 billion in total debt, and their $100 billion in unfunded pension liabilities. In short, they have an outlay problem not an income problem. Letter and package delivery is still a very lucrative enterprise. Certainly FedEx, UPS, and DHL wouldn’t exist if it wasn’t. They also wouldn’t exist if they posted annual losses like the ones the USPS are posting.

Unlike the DoD, there is a slight possibility that the USPS could go private. Or at the very least quasi-private. By selling off the USPS entirely, the US government (aka the US taxpayer) would absorb the debts. But at the very least the USPS would stop hemorrhaging money.

The up side to that, is there would be freer and more open competition in the delivery industry. It could mean lower delivery costs, more efficient delivery, and competition even in letter delivery – which as it stands now: “You can ship a letter using a private courier like FedEx if it’s ‘extremely urgent’ or if the rate you pay to send it is at least six times the current price of USPS first class postage.”

“Equifax learned a terrifying lesson in 1993. Armed USPS inspectors raided the company’s Atlanta headquarters to determine whether or not the letters the company had been sending via FedEx were indeed ‘extremely urgent’ as required by the Private Express Statutes. The letters didn’t pass the test, and Equifax ended up having to pay a $30,000 fine.”

Either way, the government clearly isn’t fit to manage money. And yet somehow there are those who are eager to entrust this proven failure with healthcare? Education? Safety?

There is a serious housing crisis happening in many cities […]