It’s hard to say if the TSA is getting creepy or lazy with their screening and surveillance, but either way, they are getting far more intrusive. 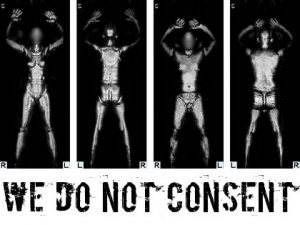 When you went to the airport before 2001, you would go to the airline ticket counter if you had bags to check … then go “through security.”

At security, they would put your carry-on luggage through scanners to see if there were illegal objects or chemicals. You would get your ID checked. Then you would get on your plane and travel to your destination.

In 2013 the TSA started charging U.S. citizens for their freedom with its $85 “pre-check program.” All so you didn’t have to remove your shoes at the airport.

Now, thanks to the Department of Homeland Security (DHS), any traveling U.S. citizen will also have to endure biometric screening. It’s part of a privacy-dissolving “enhanced security process” the DHS is employing whether you like it or not.

And this “enhanced program” includes creepy facial recognition, fingerprinting, and the other steps you’ll have to go through at TSA checkpoints. Even if you have a spotless criminal record. Talk about “innocent until proven guilty.”

It appears U.S. citizens will even have to foot the bill for this new package of privacy-invading “services,” with TSA relying on “pre-check” payments and other investments from companies.

Techdirt sums up the latest bureaucratic buffoonery from the TSA rather nicely:

Now, it’s everything about everybody, no matter how useless this information is 99.9% of the time. Rather than move towards smarter screening methods, the TSA has decided to subject everyone to the same level of screening with the same arbitrary rules stemming from airborne attacks the TSA failed to prevent.

This is just another way for another large U.S. Government institution to build more and more complete “dossiers” on all of its citizens. That way, if you do anything wrong (whether it’s actually wrong or not), they have plenty of data to mishandle about you.

From another Techdirt article, we get the real intentions behind an invasive facial recognition program like this (emphasis mine):

Use of automated facial recognition is intended by the DHS to become a routine element of the surveillance and control of all air travelers, foreign and domestic. As the head of the CBP, Commissioner Kevin McAleenan, said in a press release in June 2018, “We are at a critical turning point in the implementation of a biometric entry-exit system, and we’ve found a path forward that transforms travel for all travelers.”

A different use of the same kind of facial recognition program in law enforcement racked up “35 bogus hits and one false arrest.”

So if they build this massive database of faces, and yours is included, what if you are arrested because of a “bogus hit?” Of course, if you’ve done nothing wrong, you’ll probably be released … after 4 to 10 hours sitting in a room and being questioned.

Perhaps more disturbing is the recent trend of “new security programs” that get implemented without any pushback, feedback, or voting. That tells a lot about how these institutions feel about your privacy. (Hint: They don’t care).

The U.S. is starting to treat their own citizens like second-class citizens, plain and simple. That is, until enough of them say “Enough!”

Until then… your private life is an open book that any “bored” Government agency or individual with cheap technology can exploit.

P.S. Until “alphabet institutions” like the DHS and TSA are abolished, you can’t trust them. No matter how they sugar coat what they are doing to your privacy.

That’s why I suggest taking matters into your own hands by getting my special report today. You’ll learn how to go completely “off the grid,” without having to move out to a cabin in Montana.

Year over year the fiscal disasters throughout the government make […]