Chicago, Illinois is in the headlines again for their latest sin tax, but they aren’t the only guilty jurisdiction targeting lifestyle choices.

The government keeps squeezing the people with regulations and taxes, and people find a way to escape. For example, there seems to be an inverse relationship between a down economy and high alcohol consumption, indicative of perhaps people trying to cope with hard times.

Regardless of whether the degree to which individuals “escape” is healthy isn’t the point. If they want to waste away in front of a TV playing video games, drinking, or eating cheese puffs, that is absolutely their right to do so.

Sin or vice taxes aren’t new. It’s discriminatory in practice and not nearly as virtuous as some might think. To single out a group of people who do X, brand them as unsavory or less-than in some way, and then suggest their lifestyles are deserving of some financial penalty, while bankrolling their choices is the peak of hypocrisy.

If states rely on sin taxes, they don’t want you to QUIT. Oh no. They rely on your habit being so deep seated that you won’t quit and will subsidize their pet projects. I mean, Washington state legalized marijuana, and levels a 37% sales tax on it! Colorado levels a 15% excise tax and then a 10% sales tax on their weed. With that much to gain, it’s a wonder they aren’t encouraging people to take it up!

Sin taxes account for close to 4% of government revenues across the US, higher or lower depending on which state or city you’re in.

Here are a few states that are very dependent on sin taxes as a percentage of their overall tax revenues: 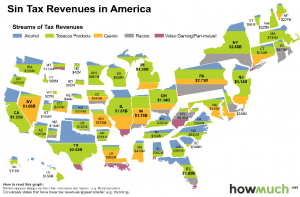 Many fun-sponges in office who use taxation as a social engineering mechanism seek levy taxes on everything from alcohol, to cigarettes, to soda, to legalized marijuana, to … you got it… video game consuls.

It’s all part of Chicago’s elaborate “Amusement Tax” scheme. It used to be this tax was just on stuff like concerts and sporting events. Then it expanded to in 2015 to streaming services like Netflix, Pandora, and Spotify. As of November 14th, the city has contracted with Sony to tax those using a PlayStation, the same 9% tax as all the cloud and streaming services get.

Not everything offered via the PlayStation is taxable… yet. Thus far it is rental transactions that are taxable thus far. Apple refused to contract with Chicago, on the grounds that it is unconstitutional, or at the very least illegal.

Liberty Justice Center sued on behalf of online streaming customers after 2015, was shot down in May of this year, and is now waiting to come before the First District Court of Appeals. In a separate suit Apple also raised the question of whether such taxes are in violation of the 1998 Internet Tax Freedom Act which prohibits local governments from “levying taxes that discriminate against electronic commerce.”

“Jeffrey Schwab, the lead attorney on Labell v. City of Chicago, said, ‘We think the city doesn’t have the constitutional right to do that. They tax not based on whether or not anyone used it in Chicago, but if they had a billing address in Chicago.’”

Not much different than the “Market Fairness Act” that has online proprietors keeping track of where their customers are and tracking their tax rate accordingly.

Chicago ranks #1 (or highest) in the United States for about ten different taxes, by the way.

It’s no wonder that city and the state of Illinois is seeing such a large constituency just leaving:

“From the nation’s highest wireless taxes, to taxes on streaming services such as Netflix and Spotify, to a garbage collection fee – not to mention a record-breaking property tax increase and the highest sales tax rate of any major city in the nation – residents are tapped out and have started to express their anger.”

Since 2010, Illinois has lost approximately 643,000 residents and a subsequent $3.4 billion in adjusted gross income to neighboring states.

The state of Illinois itself is horribly mismanaged and has been for decades. Much like it’s cousin, California, it has an untenable pension program. If you confront a politician about this, they will say it’s utter malarkey. Illinois just added all these jobs! Here’s what they DON’T say: One quarter of the new jobs in Illinois are government jobs… which only adds to the unfunded pension liabilities.

One the one hand, Illinois is pitching woo to be Amazon’s second headquarters with sweetheart tax deals, but on the other, it’s smothering its existing smaller businesses with wildly unnecessary tax burdens, ostensibly to offset the cost of large pitches like this.

State and local taxes (SALT) are terrible, but they are decentralized. If you don’t like federal taxes, you undergo the process of expatriation. That’s a far more arduous process than perhaps moving to a less onerous neighboring state or city if the taxes get out of hand. But SALT is horrible for local small businesses.

Any politician who supports all these sin taxes as being ancillary to public service and works should likewise explain why their CAFRs (Comprehensive Annual Financial Report) are largely unaccounted for.

It's hard to say if the TSA is getting creepy […]