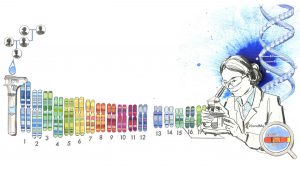 The idea of spitting into a vial, sealing it up, and sending it off to a company like 23andMe seems cool at first.

You can discover what you can about your genetic background, family, and the probability of getting certain diseases. Talk about technological advancement.

People said the same thing in 2006 when Facebook had people “… start sharing and connecting with your friends, family, and people you know.”

Now it’s 2018, and with Facebook’s egregiously unethical behavior, we now know how that turned out (hint: not good at all).

But companies like 23andMe have even greater potential to mishandle your most sensitive private data, just like Facebook did. They also have the potential for unethical “biobanking” of your DNA.

They aren’t starting off on the right foot, either. From their own website, they make a vague statement that shouldn’t inspire trust:

By choosing to have 23andMe store either your saliva sample or DNA extracted from your saliva, you are consenting to having 23andMe and its contractors access and analyze your stored sample, using the same or more advanced technologies.

From this one sentence out of several paragraphs, we discover at least three uncomfortable “grey areas”…

According to the same part of their website, 23andMe gets to store your DNA for 10 years unless “they notify you otherwise.” (So they could store it longer?)

But other “contractors” could be anybody, at any time. And if 23andMe goes the Facebook route, if there’s money to be had… they just may exploit the opportunity.

And since this consent document says 23andMe can store your saliva or DNA, what if technological advances allow them to do something else with your saliva?

Then what? Are you supposed to just trust them not to go down Facebook Rd.? I certainly wouldn’t. But this potential privacy invasion doesn’t only apply to 23andMe.

Ancestry.com also makes you work pretty hard to protect your privacy. According to Business Insider, you can actually delete your DNA results with a few clicks. But if you want them to toss your spit sample, you have to call a special number.

Ancestry has more than 800,000 samples, and 23andMe has millions of DNA samples in their databases. A treasure-trove for unscrupulous agencies to try and access. And it’s not like police haven’t tried, according to Techdirt:

In Usry’s case the crime scene DNA bore numerous similarities to that of Usry’s father, who years earlier had donated a DNA sample to a genealogy project through his Mormon church in Mississippi. That project’s database was later purchased by Ancestry, which made it publicly searchable — a decision that didn’t take into account the possibility that cops might someday use it to hunt for genetic leads.

But it gets worse, because this could affect innocent people like you and me. The same Techdirt article later revealed a shocking finding:

…it’s entirely possible that completely innocent people might have to go through the traumatic experience of being a suspect just as Usry did before more precise tests ruled him out.

Those “precise tests” you could be forced to take as a suspect could then put you in a searchable database. Even if you didn’t want to submit your DNA in the first place.

According to their privacy statement, a company called Helix can store your DNA indefinitely. Hopefully they never have a security breach.

Bottom line, you shouldn’t treat the decision to submit your DNA for analysis lightly. Even if you can find out useful information, the price you pay may not be worth it.

And right now, the rest of your private life is an open book that any “bored” Government agency or individual with cheap technology can exploit.

P.S. Ancestry and 23andMe are just the beginning. Soon there will be other companies asking you to blindly trust them, hoping you won’t read their privacy policies.

That’s why I suggest taking matters into your own hands by getting my special report today. You’ll discover the secrets for securing your privacy, while you still can.

Chicago, Illinois is in the headlines again for their latest […]