Russia and China Still Paving the Path Around the US

Russia and China Still Paving the Path Around the US

Between trade wars and sanctions, Russia and China continue to find ways around the US both as a consumer and a reserve currency. 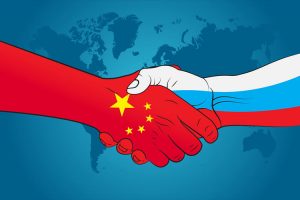 The maverick decisions coming out of the White House are quite astounding.

I can’t help but marvel at some of the recent directives Trump has signed off on:

He’s very obviously NOT a politician. And while he’s a businessman, he’s not much of an economist either.

He has proven to be a decisive but short-sighted man. This chicken match with China over tariffs and trade seems like he’s getting “tough” with China; and that’s precisely what his fan base sees. But that’s not true for the rest of the world.

American farmers have seen such a sharp decline in exports, they needed a bailout. What became of the clients that were buying up their crops? Are they just waiting for all this to blow over? Or did they find somewhere else to get their commodities?

They go somewhere else, like Brazil. Brazil’s exports of soybean alone to China jumped 22% in the first three quarters of 2018 resulting in “nearly 80 per cent of Brazil’s soy exports now head to China”.

Southeast Asia also seems to be a beneficiary from the trade war. Foreign Direct Investments (FDI) are up:

What happens when the trade war is over? Everything just goes back to the way it was? I would think that those who have profited from this fallout might be inclined to retain that business. It’s not some yoyo where the toy comes back when you tug the string at the right moment.

Trinh Nguyen, a senior economist at Natixis Asia Ltd. in Hong Kong describes Southeast Asia this way: “Southeast Asia serves both as a great growth market, a place to offshore thanks to lower costs of production and liberalization of trade, as well as a source of mitigation from geopolitical risks.”

If developing countries in South America and Southeast Asia prove to be both economically and politically beneficial, what does the US have to counter with exactly?

The trade war is a small snapshot of a larger dynamic, however. It’s not just about where commodities will be sourced. It’s the geopolitics of US political mood swings. From sanctions, to trade wars, to interventions and other bully tactics, the US is taking its position in the world for granted.

For example, large divestments from the US dollar continue to happen. China sold off another $7.7 billion in US treasury bonds. But in a rather startling and bold move, Bloomberg reports Russia dumped $101 billion in US holdings last spring, in response to another round of sanctions.

“The central bank moved the equivalent of $44 billion each into the European and Chinese currencies in the second quarter, according to a report published on late Wednesday by the Bank of Russia, which discloses the data with a six-month lag. Another $21 billion was invested in the Japanese yen.”

Russia now holds about one quarter of the world’s yuan reserves, according to the IMF.

This is all starting to add up to the US slipping in its reserve standing. I say slipping because it will be a slow fall. China, Russia, and other developing nations continue down their collaborative paths, and the US insists upon its protectionist policies, a tipping point is inevitable.

Only last September, China, Russia, and the EU started to collaborate on a work around US sanctions against Iran, calling it a “Special Purpose Vehicle”.

Its intention is to keep trade moving amongst the four entities, while avoiding US sanctions and keeping Iran at the table regarding negotiations of the 2015 nuclear deal. The Guardian lays out some broad strokes on how this would work:

“Versions of the SPV floated by thinktanks suggest it could underpin a sophisticated barter system that can avoid US Treasury sanctions. For example, Iran could ship crude oil to a French firm, accumulating credit that could then be used to pay an Italian manufacturer for goods shipped the other way, without any funds traversing through Iranian hands or the banking system.

“A multinational European state-backed financial intermediary would be set up to handle deals with companies interested in Iran transactions and with Iranian counter-parties. Any transactions would not be transparent to the US and involve euros and sterling rather than dollars.

“The proposal is additional to a blocking statute passed by the EU in August that theoretically makes EU companies immune from sanctions imposed by the US in pursuit of its Iran policy. In theory, the statute empowers EU firms to seek compensation from US Treasury for trying to impose extra-territorial sanctions in breach of the statute. So far this statute has not been tested in court.”

It’s quite a scheme, but it’s likewise delusional to expect everyone to tolerate the US dragging them around by the nose. Russia and China among other nations like India and Brazil, are going to do what they need to do, even if that means dealing with nations that the US disapproves of. That pretty much guarantees them a permanent place on the US sh*tlist. But the EU relies on some of these countries as well for trade, and they likewise won’t toss the baby with the bath water to join the US in its spiteful games.

The US needs to grow up. The bully tactics are losing their effect, and the rest of the world is successfully finding a way around the US.

Apps track your locations which can give a lot of […]