When populism leads to seizing power and property in defiance of market forces, you inevitably wind up with destruction and poverty. 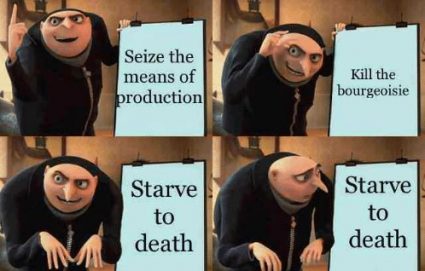 The world is watching as supposed economic “underdogs” are seizing the means of production from their alleged oppressors. All I see is accelerated collapse.

No different than the 13 year old overthrowing the household to make things “fair”, there are places in the world where this has happened or is currently happening.

In the United States, one of the most famous stories in its recent history is that of Detroit. Detroit went from being the 4th largest market in the US to the 11th. It’s like hearing that the US slipped from the top ten most economically free countries in the world.

The Detroit riots in 1967 and the 20 year leadership (if you want to call it that) of Coleman Young precipitated and economic “cleansing” of sorts. White people left Detroit by the tens of thousands… nearly 147,000 in a matter of two years… and little effort was made to encourage them to stay much less come back.

Coleman Young had a retributionist agenda. He wanted a black city, with black people in the ranks. To be fair, there are several free market endeavors to that end that were VERY successful. Black Wall Street was one (albeit deliberately destroyed by white politicians with the help of white residents) that was very prosperous. Another was the work of Philip Payton Jr. who used the free market to defend black residents in New York. In both these cases, the times were highly prejudicial against blacks, and still prosperity was had. Black prosperity was absolutely possible, but not how Young was going about it.

Coleman Young was a union guy. The failure of Detroit was in his idea to adopt politically motivated strategies that favored anti-market union tactics over the free market. To this day, any development in poorer areas is considered a form of “gentrification” rather than revitalization. Young got his black city, but lead it into ruin… and that torch has been carried by one corrupt politician after another for decades since.

I won’t contend that Detroit was entirely harmonious in the 60’s. Nowhere was. It was the civil rights era and the US was seeing a social upheaval leading to the end of the Jim Crow laws. No doubt, Jim Crow needed to end, and I honestly don’t disagree with much of the civil disobedience it took to make that happen.

Riots, however, have yet to yield an ideal result, and Detroit is no exception. And while it’s true that the auto industry was already expanding outside of the area to dilute union power and build horizontal factories that Detroit could not facilitate, that doesn’t explain the deterioration of the city to such a degree.

It’s not blacks or whites that make a place wealthy. A lesson Young never learned. You can find plenty of squalor filled white shanty towns throughout the US with the same failed ethic. It’s economics. He put all his faith into the automotive industry, threw his weight around in the unions, and not only drove out enterprise, but replaced it with nothing.

White people fled to avoid the strife and find new opportunities while blacks moved in. Young’s policies facilitated that.

Africa likewise has a very dark racist history between blacks and whites. No doubt, white colonialism and Apartheid were brutal (and that’s putting it quite lightly). African nations are still healing. Apartheid in South Africa, for example, only ended in 1994. But many relics remain from white colonialism, one of which is arable farm land ownership. Originally seized by colonists and given to whites, 75-85% of that land has remained in white possession.

But the land was and has been successfully and sustainably farmed for generations by its white owners.

In Zimbabwe, white farmers’ land was seized. Even the white farmers who were renting from black owners were kicked off. Here is the net result of this policy:

“Since then, Zimbabwe has been in an economic tailspin, with banks collapsing and with the government unable to pay the wages of many in the civil sector.

“Much of the land previously taken by those in the Mugabe regime has benefited the security, police and military wings of the leader’s circle.”

“The country that was once dubbed ‘the breadbasket of the region’ has suffered an estimated $12 billion in lost agriculture production since the land occupations took place and has had to rely on donor handouts and food imports from neighboring countries. At least 1.8 million tons of the staple grain, maize, is required annually to feed the nation.”

It has become so harsh, that Zimbabwe is reconsidering its position. Maybe some whites can come back under some provisions… Like THAT instills a whole lot of confidence. Not many takers so far, since the farmers who were kicked out went to neighboring Zambia and kicked their agricultural industry into HIGH gear! And they did so without colonial backing.

South Africa is looking to follow in Zimbabwe’s footsteps. Literally able to watch what is happening to their northern neighbor in the past 20 years, they are totally ignoring all that and insist upon repeating their mistake.

Racial and politically motivated action will not yield success or prosperity. Detroit, Zimbabwe, and soon South Africa will prove this. It’s not the race of the owner that matters. It’s the productivity. And the white farmers knew how to farm, while the black owners did not. It’s not to say they couldn’t learn, but they didn’t learn nor did they acquire the capital it took to run it, and it has gone to ruin.

I expect the same to happen as Trump cracks down on immigrants and migrant workers. His obsession with “taking America back” has blinded him to the fact that Americans are not willing to do this work. So acres of produce will go unpicked because we won’t let the people who are willing to harvest do the work!

And what story of socialism would be complete without a peek at the latest in Venezuelan innovation? Venezuelan authorities recently seized a plant owned by American corporation Kellogg. Kellogg announced it was leaving the country because of the worsening economic conditions – specifically citing strict currency controls, lack of raw materials, and soaring inflation – which President Nicolas Maduro has called “absolutely unconstitutional and illegal”.  He went on to assure the public, “I’ve taken the decision to deliver the company to the workers in order that they can continue producing for the people.”

Prior to this in 2016, his regime took over the Kimberley-Clark plant which manufactured various hygiene products.

Our dear South American socialist has seized the means of production for hygiene and cereal products! Socialist WIN! Yet the people still go without? The corporations pulled out due to lack of resources among other insurmountable economic issues, but it’s their fault for why Venezuela is failing?

The heart of EACH of these issues is that populist socialist ideas don’t work.

This isn’t meant to show some superiority of whites or western culture. In fact, the point is to demonstrate that race, populism, unions, rhetoric, politics will NEVER be a sufficient substitute for skill, ethic, know-how, and free market forces. Central planning based on the former will lead to not just failure, but moral hazard. The solution to a history rife with racism, corruption, and failed policy isn’t more central planning of failed policies.

Trump's decision to back out of the nuclear deal with […]