The protectionism blows just keep on comin’ as Trump eyes imported cars as his next tariff target. 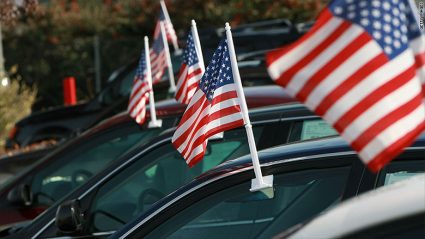 Donald Trump is a dyed in the wool protectionist; the likes of which will have a devastating effect on the US economy as well the rest of the world. The US regulatory regime alone, is already economically debilitating.

Trump’s steel tariffs were supposed to SAVE steel worker jobs. Yet, that’s not what is happening in Youngstown, PA at all. Their employment is down 1.6%. Even in areas where steel employment is up, it’s not by very much. Steel in general isn’t a very large American industry to begin with. Much like the Affordable Care Act was meant to address the 16% of Americans without health insurance, so too are the tariffs meant to address a tiny slice of the American workforce.

For some reason, American politicians LOVE to pass sweeping legislation for the tiniest sliver of country, but not before selling everyone on the fact that it’s a bigger issue than it actually is.

NOW, in addition to the steel tariffs, Trump is looking to levy tariffs on imported automobiles. That means a premium of up to 25% on new cars.

Needless to say, this would be a huge blow to many Americans.

Under what possible pretense could Trump be doing this, you might be asking? “National Security”.

Section 232 of the 1962 Trade Expansion Act is what is being cited as the legal grounds for doing this. It’s the same one cited for the tariffs on steel and aluminum:

“The Commerce Department said the imports of those metals undermined the long-term viability of domestic industry and were therefore a security threat.”

Commerce Secretary Wilbur Ross is launching a probe into the potential threats automobiles and parts could pose; a probe that is could take up to 9 months.

That’s a stretch. Even many Republican cohorts are balking at this probe and the premise for it. They are going to investigate whether a decline in the US auto industry would threaten the US economy by reducing jobs. But that’s such a silly notion because of how balkanized the automotive manufacturing process is now. The supply chain is globally interconnected. What Trump is doing is a much greater threat than simply losing market share.

What is more than likely happening is this probe is meant to get Canada and Mexico on board with Trump’s revisions to NAFTA. Some quick stats on the trade numbers in the automotive industry:

Here’s the thing: cars aren’t all made in one place anymore. They are made all over the world. Sure, the parent company could be in Japan or Korea, but the parts could be made in Mexico and assembled in the US. It’s a mixed bag that will hurt a LOT of Americans because there are not only plants, but offices and dealerships in the United States that employ Americans. Here’s just a partial list of assembly plants in the US:

70% of Asian automobiles sold in 2017 were made in a US or North American plant. 12 out of the 17 foreign automobile plants in the US are Asian manufacturers. Nearly every one of those foreign-owned plants is non-union. Meanwhile, the United Auto Workers union is keeping an open mind toward this only because they think it might favor their members.

The unions are looking for the removal of non-tariff barriers of entry into the Asian markets which they believe hinder U.S. exports. In response, the Trump administration is looking to subject foreign-made cars to stricter emission standards.

But again, what is “foreign-made” exactly? Where the parts were made? Where the car was assembled?

Here is something to keep in mind from the President of the National Foreign Trade Council:

“I fear that they’ve now crossed the Rubicon into wholesale protectionism,” said Rufus Yerxa, president of the National Foreign Trade Council, a trade policy group representing U.S. companies. “Lots of countries have resorted to protectionism when their economies were doing badly. It almost never works. But Trump may be the first leader ever to do it when the economy is booming. He’s trying to fix a problem that ain’t broke. The auto industry is healthy.”

What is baffling is that Trump actually went after the regulatory regime of the US domestically. He slashed taxes, cut through a lot of regulations, but then thinks it’s a good idea to instead impose them internationally. He truly doesn’t understand how the global economy is connected. If he did, protectionism would be the LAST thing on his mind.

When populism leads to seizing power and property in defiance […]