The TSA is grasping at straws to find some justification for its existence, and establishing a “secret watchlist” of travelers is the latest protocol to be adopted. 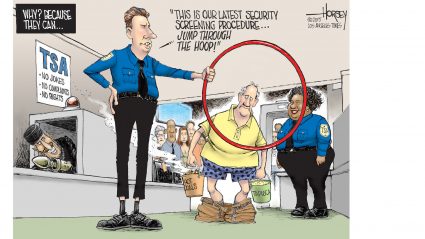 The TSA is at it again, trying to make itself relevant in the face of the overwhelming evidence that they are not. My lifestyle and businesses have me flying all over the world, and my visits to the US are tedious when it comes to the TSA. (Lest we forget the notorious Belt Buckle Incident of 2013! Good times.)

Anyone who flies knows the ridiculous pageantry that goes into the whole security checkpoint ordeal. Agents shouting about laptops and water bottles; a display of all the confiscated toiletries; something about shoes, but kids get a pass. These poor families scrambling to get the kids to stay in line and part with their little stuffed animals and toys.

I have a general disdain for the government and its many tentacles, but there is a pecking order to it. Like firemen – while I think they can be privatized – are generally decent. They wait to be called, they aren’t intrusive, they go headlong into danger save property and people, and get out. The NSA on the other hand is highly intrusive, but hands off. Then you have cops and TSA and they are not only intrusive, but very hands-on.

I write a lot about privacy, the surveillance state, and the police state because privacy is like safety: every individual strives to achieve maximum levels of both, but there’s always someone who challenges those efforts. You can’t have systemic invasions of privacy, if you don’t have a systemic surveillance regime; and the surveillance regime is toothless unless you have a brute squad to execute and enforce it.

In the wake of budget cuts to the TSA from the Trump administration, the TSA struggles to maintain its relevance. It hasn’t prevented a single terrorist attack. It can’t even consistently catch suspicious or dangerous items. In 2015 it was discovered that TSA agents failed 95% of the airport breach tests.

In the past, it tried to implement fines for travelers with “bad attitudes”:

“The TSA slapped fines on almost 5,000 people in 2003, yet never made any public announcement that people faced fines for violations. There were no warnings and people who received a fine in the mail were never informed of their right to contest or appeal the fine. TSA waited until early 2004 to announce the fine system, at which time the maximum fine was raised from $1,100 to $10,000.”

Much like the TSA’s very existence, it was determined to be unjustified. The TSA could not define what constituted cooperation or the lack thereof insofar as attitude was concerned, so the matter was dropped.

They have molested and battered a lot of people. They refuse to be transparent about the claims against them or number of people fired due to complaints deferring all who ask to file a FOIA request. In one case that made it to court, where a man’s genitals were brutally beaten in a “pat down”, a lawyer for the DoJ argued:

“[T]here’s no law ‘establishing a specific degree of permissible intrusiveness of a security screening pat down,’ and that, since there’s no law, Americans should have no legal recourse.”

Take all this and what do you get? Well, in a NORMAL situation, you’d have the dissolution of the agency entirely! But this is Merkia… not so fast. Now the TSA intends to keep a watchlist of people who “resist” during the screening process:

“The Transportation Security Administration has created a new secret watch list to monitor people who may be targeted as potential threats at airport checkpoints simply because they have swatted away security screeners’ hands or otherwise appeared unruly.

“A five-page directive obtained by The New York Times said actions that pose physical danger to security screeners — or other contact that the agency described as ‘offensive and without legal justification’ — could land travelers on the watch list, which was created in February and is also known as a ‘95 list’.”

Anyone who cares about their civil liberties should be very concerned about the nebulous nature of this protocol. Remember when we wrote about the Suspicious Activity Reports (SAR) that banks file for transactions over $5,000? Also recall that there are in fact quotas for them, and banks risk being fined for “underreporting”. For something as paltry as $5,000? That’s like a day’s deposit from a small business that might very well deal in cash transactions due to the low price points of their products.

With that in mind, consider the TSA’s watchlist, and perhaps ask a few questions:

One of the biggest criticisms of any McCarthy-esque watchlist is all the innocents that get caught up in the dragnet.

“Government watchdogs have long criticized such watch lists, especially after evidence concluding that as high as 35 percent of the names that are designated for inclusion are either outdated or added without adequate factual basis. Individuals are denied any meaningful way to correct errors and clear their names.

“In recent years, the government has established rules that are intended to prevent intelligence agencies from keeping secretive, open-ended watch lists based on suspicions that are ultimately unfounded.”

It’s difficult to understand why this agency is even still around. It is the epitome of failed central planning. It is demonstrative of how weak government is when it comes to the administration of anything safety related. This is the sort of failure that runs rampant in regulatory regimes, and will likely be true of gun control measures.

When the government defines the premise of a policy as being in the name of “safety”, be assured it will be a very expensive failure, paid with your money and civil liberties.

The protectionism blows just keep on comin’ as Trump eyes […]