The American surveillance state hasn’t really shrunk or gone away, but rather has repackaged and obscured itself. 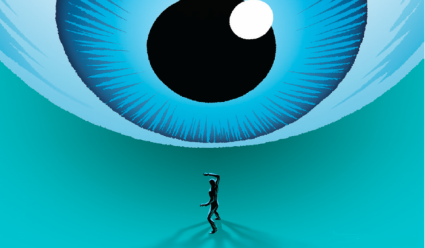 We did several articles on the American surveillance state, but it doesn’t look like it’s gone anywhere. Edward Snowden revelations notwithstanding, it looks like the only thing that’s changed is the level of stealth the government has taken it to.

There’s a movie called “The Kingsmen”. If you’ve never seen it, I highly recommend it. Aside from being a cool story line, it actually has something to do with this topic. Without giving anything away, part of the story has to do with the villain giving away free cell phones to everyone, and ultimately using that to manipulate them.

On the one hand, the proliferation of mobile devices was a huge boon for civil liberties, holding government officials and others to account for their actions. On the other, much like digitalized money (with the exception of crypto currencies), it’s made us more vulnerable, as was the case in the movie.

Obviously, cell phones aren’t going anywhere. They are here to stay. But it’s important to know how they are being used against you as well.

First, there is the Stingray. Stingrays, for those who might not already know, are cell tower simulators. It’s a device that mimics the signal of a cellular tower and basically tricks cellphones into connecting to this fake network. Through this connection, law enforcement can track cellphones’ locations and even download their content.

The technology has been around for years. But the extent to which various levels of government have been using it is eerily unclear. I’m not keen on the idea of using these methods to begin with, but I’m even less amenable to not knowing how this technology is being used. And it is being used, make no mistake about that.

That’s a lot of money and devices to just remain in storage closets.

They are using them alright, but they don’t want that on record. So much so, that they would sooner negotiate a plea deal to let a known robber go, than to disclose they are using this technology, as was the case in Tallahassee.

Law enforcement had a clear cut case against Tadrae McKenzie and his friends for armed robbery. However when the defense pressed the investigators and police about how they found him, rather than disclose their use of stingray, they opted for a plea deal resulting in no jail time and some probation. They would sooner let an armed robber off than be forthright about their methods?

The second discovery is at our borders. A few years back contributor, Stephen Hilgart, shared his experience reentering the United States from Canada. (For the record, Stephen is an American.) They have been asking for phones for a while. But now, it’s possible that they will also start demanding passwords to not only unlocking your device, but to your social media and emails.

In the same way fluids over 3 ounces were banned from flight because of the explosive smuggled into an airport via a beverage; or the way we were all told to take off our shoes because of the shoe bomber; now phones are being searched because the San Bernardino bomber went on terrorist rants on his social media… and had someone seen that, perhaps it would’ve been prevented.

It’s more theater than prevention. And it’s more control of the compliant masses than actual precaution or effective safety measures.

As of now, they aren’t demanding those passwords of everyone. But in an interview with NPR, Homeland Security touched on some of the finer points of their plan:

“Under the plan, [Homeland Security Secretary John] Kelly said, border agents would ask visitors ‘to give us a list of websites that they visit and the passwords to get on those websites to see what they’re looking at.’ Agents would also examine “what they tweet, cellphones, cellphone conversations or cellphone contact books to where we can run them against databases: telephone numbers, people, names.’”

“To start with, Kelly said, the proposal would be aimed at visitors from the seven nations named in a 90-day travel ban that President Donald Trump set in a Jan. 27 executive order. Those majority-Muslim countries are Iran, Iraq, Libya, Somalia, Sudan, Syria and Yemen. He added that the program ‘could be’ expanded.”

In the last three months or so, visitors from 38 countries – including European Union nations – that usually travel visa-free to the United States – were asked to fill out an online form that has an optional listing of social media used by the traveler. It was optional, yes. But it shows the malleability of this plan and how easily has already expanded.

The Golden Rule is fairly clear: do unto others what you have others do unto you. Ron Paul was booed for it in the Bible Belt of all places. But the converse of that rule is also true: do NOT do unto others that which you would NOT have done unto you. When we institute these policies on those coming into the US, we set up our own citizens for the same scrutiny abroad. What’s more, we set our own citizens up for the same scrutiny here.

Then we wind up right back where we started before the Edward Snowden revelations. Trying to find a particular needle in a stack of needles. I’m all about asset protection. One of your greatest assets is your privacy. And while I don’t personally operate in digital protections, it’s still important to share information and keep people apprised of what’s happening in the government shadows.

Be aware. Know your rights. And stay safe. I believe it is going to get a lot worse before it gets any better.

Trump’s trade and immigration policies are unfolding, and the unintended […]