The US has seen some ups and downs in 2018, but if the ups were temporary economic sugar highs, and the downs are a constant, then what happens when the dust settles in 2019? 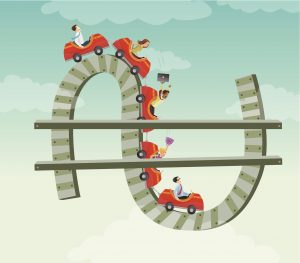 It’s not all gloom and doom. I’m hearing some good stuff, and I hope that continues into the new year.

The US is seeing very low unemployment both overall as well as state by state and across demographics. According to Trading Economics, unemployment rates are steadily holding at: “adult men (3.3 percent), adult women (3.4 percent), teenagers (12.0 percent), Whites (3.4 percent), Blacks (5.9 percent), Asians (2.7 percent), and Hispanics (4.5 percent)”.

Despite this, the US isn’t seeing a huge surge in wages. There is some uptick but not as much as you’d think sub 4% unemployment would yield. In some states, unemployment close to breaking 2%!

Employers are trying to retain employees by sweetening the benefits packages, while balancing that with maintaining competitive or low prices. It’s great to see that sort of competition for labor. That’s how you get better treatment of employees: when employees have a choice.

No need for new laws or regulations: just competition and low labor supply with high demand. In fact, despite the minimum wage being in the single digits, many places are naturally moving toward double-digit wages just to retain talent or attract much needed help.

One particular case has me smiling: that of what is happening in Marietta, GA. Employers and recruiters are casting a wider net. Everyone knows those job postings where the employer seeks some unicorn employee, while offering hardly anything for meeting all those requirements. That was back when it was an employers’ market.

Now, people who might not have been considered for a training program, are seeing opportunities for the first time:

“Lanre Bakare, a 36-year-old Nigerian immigrant, was homeless and had little marketable work experience when he was accepted into a training program run by CobbWorks Inc., a federally funded nonprofit that matches workers and businesses in the construction, logistics, information technology, and health-care fields. Now he earns $40,000 annually as an analyst managing vendors and supplies at residential construction sites in Cobb County, Ga., and the surrounding area.”

In other good news, there is also talk of withdrawing from Syria and Afghanistan. There is a strong possibility that troops will come home and add to the labor market that is in such high demand right now.

This is a huge win for anyone who is sick and tired of endless wars. It has certainly rubbed a lot of people the wrong way, including Jim Mattis, former Secretary of Defense, who resigned when Trump made this announcement. (One less swamp member…)

We can only hope that a significant cut to Pentagon spending comes with such a decision, but we take our wins where we can.

I am going to file this under good news as well: The Fed raised short-term interest rates for the 4th time this year; the ninth time since 2015: “Auto loan rates are at a nine-year high, and 30-year-fixed mortgage rates climbed to their highest level in seven years.”

It was a bold act of courage, the likes of which I never expected to see from the Federal Reserve, to look at a slipping stock market and stick to their plan. Fed Chairman, Jerome Powell, raised rates despite Trump’s pressure: “Powell, who has not responded publicly to the attacks, said on Wednesday that political considerations played ‘no role’ in setting monetary policy.”

If the economy is as good as people say – and let’s face it, it’s nothing like it was in 2009 after the financial and housing crises – then it’s time to restore some value to the US dollar. Yes, stocks have fallen, and home sales are slowing down, some of this is part of much needed corrective activity in the US economy. Some of it also is the consequence of Trump’s trade war, and the uncertainty thereof.

I don’t credit Trump for all the good happening especially since he was vocally against the interest rate hikes, with some rumors of wanting to fire Jerome Powell. But it is happening under his watch, much like the dot com boom happened under Bill Clinton.

While I’m annoyed at Trump’s weakness in defending gun rights as well as the tepid action to overturn Obamacare, where he has been most disappointing is on spending.

…The budget he signed off on, was ridiculous, especially the $165 billion in funds toward the military who recently just failed their 20 year overdue audit.

…The wall he wants is preposterous. With a conservative estimated cost of $21.6 billion. Government NEVER comes in at budget for anything (lest we forget the Affordable Care Act or even California’s Light Rail project), so if Americans are lucky, it won’t happen.

…The Farm Bill should be totally unnecessary if he just ended this trade war.

And yet, at the end of all this economic stimulation, the US has a tab that is still wildly out of control: with a national debt at nearly $22 billion and a deficit of $874.4 billion for FY18 and 886 billion in FY2019.

I hope all these positive economic indicators are the real deal and keep going, but if all this prosperity is just propped up by debt, then it’s a bubble, not progress.

Real economic growth is in productivity and innovation, not in spending and debt. And let’s not confuse Keynesian stimuli with real growth. Built into many of the reports is the response to natural disasters, the front loading to beat the tariffs, and several one-time prompts like tax breaks for repatriation of offshore funds. There’s also the farm bailouts propping up the farmers from the blowback of the trade war. (A very detailed breakdown can be found here.)

I hope 2019 can come with some aggressive fiscal responsibility and significant spending cuts, but realistically speaking, I don’t think it will. Which means that all these little peaks of economic promise might very well just be temporary sugar rushes.

Your Insurance Company Could Be Spying On You (Here’s How)

Health insurance is one of many industries where data collection […]