Bernie Sanders had Jeff Bezos of Amazon in his crosshairs when he introduced the “Stop BEZOS Act” in the Senate last Wednesday. 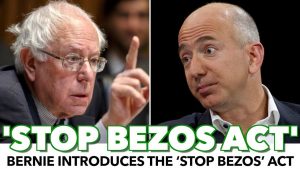 It’s a page right out of Atlas Shrugged, Bernie Sanders set his sights on corporations with 500 or more employees whose workers may be on some form of public assistance. He’s calling for Specifically, if, for example, an employee must resort to receiving $2,000 in public assistance, then the corporation would pay $2,000 in taxes for that.

It’s called the “Stop BEZOS (Bad Employers by Zeroing Out Subsidies) Act”. They put more time into the acronym than the economics of this ridiculous legislation. There has been a big hullaballoo regarding wage laws. Some are calling for a “living wage”, one that doesn’t require individuals to get onto public assistance such as food stamps or public housing.

A lot has been put onto employers. They have become responsible for making sure their employees can manage their lives: from compelling them to provide health insurance, to paying for unemployment insurance, to splitting the FICA tax obligations, to processing their taxes and garnishments. Now they want employers to make sure they are paying their workers enough to keep them off public assistance.

But why is all this their responsibility and not that of the employees? I mean, either the job is worth $8 per hour or it’s not. If it is, and someone is willing to work it, then isn’t the employer mitigating the financial circumstances of their employees by hiring them in the first place?

Why is it that the high school student who has no financial obligations and takes an $8 per hour job receives different considerations than the married with 3 kids and one on the way guy who does the SAME job for $8 per hour? Equal pay for equal work is the what I hear chanted in the streets when it comes to race and sex, but why not personal circumstances as well?

That’s not an employer problem. That’s an employee problem. And while their circumstances are indeed troubling, it’s not Walmart or Amazon’s job to bail them out… twice: once when they pay their regular taxes, and again when they have to pay for their employees’ draw.

What is particularly odd is how Sanders positions these employees on public assistance as somehow being subsidies to large corporations. How does Section 8 Housing or an Earned Income Tax Credit benefit Amazon or Walmart or any employer for that matter? They never see that money.

It was reported by Forbes that Walmart paid approximately 32.4% in corporate taxes back in 2011. 32.4% in income taxes amounts to about $7 billion. I don’t think that qualifies as being “subsidized”.

Do you recall the bidding war of nearly 238 different municipalities vying for Amazon to put their second HQ in their cities? There was an estimated $5 billion in total investments and approximately 50,000 jobs that came with this little endeavor. Politicians would look practically heroic bringing 50,000 jobs to their state or city!

Regardless of the starting or lowest wage, that’s still more money in some people’s pockets than they had – which could very much have been nothing. Employers assuage the crisis, they don’t create it.

But here’s Senator Sanders taking aim? In that mix of 238 municipalities was dyed in the wool blue states and cities. Chicago being one of them. All political stripes understand the political equity in tens of thousands of jobs and billions in economic activity.

What sort of endorsements is Sanders expecting? Seattle has some Amazon. Portland has Nike. San Francisco has Google. I have no idea what Rep. Ro Khanna was thinking when he cosponsored this bill. He’s in the heart of the Silicon Valley. And he wants to come after the heavy hitters that give LIFE to his district? It’s like he cut his artery just to watch it bleed.

There’s a reason why these big blue cities have these otherwise “evil” corporate giants: they bring the jobs and the tax revenue. Seattle tried to pull some silly stunt on Amazon, trying to tax them on their headcount! It was $275 per employee and would’ve amounted to $12.4 million annually to help with the housing crisis. Seattle quickly repealed that effort, with a 7-to-2 vote, because Amazon wasn’t having any of it and threatened to leave Seattle.

How far are we expecting Sanders to get with this?

Equally important is to ask what happens if this were to pass?

First, the “Stop BEZOS Act” is part of a larger matrix of national unionization. People criticize Hitler for abolishing the unions… but in fact, he didn’t. He nationalized them. And that’s precisely what laws like this and minimum wage laws are: it’s collective bargaining on a national level.

Second, let’s look at how collective bargaining winds up working. The union asks for something ridiculous. Strikes, talks, days and weeks pass, and ultimately, a compromise is made. What does that compromise look like? Well the company plainly states they can’t afford to pay out what the unions are asking for. The unions ask what it will take to make it work? And the company crunches the numbers and says, something like, “We can only afford that for X number of employees. We’d have to lay off some of them to give the remaining workers what you’re asking.” The unions don’t like the number of layoffs, so they make some concessions to reduce that number… not eliminate, just reduce.

And next thing you know, the union boss is telling the group of proletariats how he fought for you and got most of the demands met!

In the fine print is the layoffs… which ultimately is blamed on the greed of the company.

This is how hikes in the minimum wage has played out. And this is precisely how this law will play out. Look at the glorious unintended consequences of Obamacare? Employers dodged their health insurance obligations by hiring less fulltime employees, or just hiring less employees altogether.

There has been a lot of talk about lower wage earners collecting public assistance. Part of the problem is that people don’t want to lose their welfare checks. While Sanders presents a number of employees on Amazon and Walmart’s rosters who do require some form of welfare, many of them are part-time employees. They aren’t working a fulltime job at that wage and collecting. They are working part time and collecting, often on purpose. They learned the rules, and are likewise trying to ensure they don’t lose government benefits in the midst of this fight for 15.

Sanders had this to say about Amazon: “The wealthiest person in the world is advertising jobs that pay workers wages that are so low that they have to go on public assistance and be subsidized by the middle class of this country,” said Sanders in a statement. “That’s wrong. That has got to change.”

Oh NOW he cares about the middle class? He insists upon calling them rich, defines their “fair share” as way more than is actually fair, and then has the nerve to point out that they are propping up the welfare state? He’s saying this is an example of a “rigged society”?

NEWSFLASH BERNIE: YOU. RIGGED. IT.

Here’s a CRAZY idea. What if the government owned up to its role in creating poverty? The regulations, the taxes, the spending, the recklessness of the federal reserve… Where is the “End the Crown’s Tax on the Poor” Act?

This attack on large corporations like Amazon and Walmart is not smart. It WILL backfire. The very simple solution to the crappy work conditions of Amazon is to just not work there. For those in the far back left, that’s what a strike looks like, only you don’t go through the pretense of agreeing to work for them first. There will be layoffs. There will be outsourcing. There will be job loss and it won’t help the poor one bit. All of this is a misguided class war on the rich, that ultimately just shoots the poor in the knee.

The State Department is denying American citizens their passports because […]