The United States is riddled with cronyism that needlessly interferes in the market’s activities. 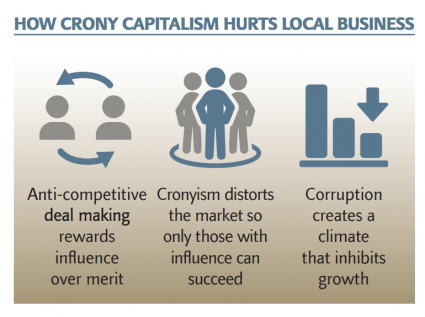 The cronyism is THICK in the United States and it is meddling with market trends that are better left alone. Three states caught my eye, all of which set a very dangerous precedent. Regardless of whether you lean liberal, conservative, or libertarian, these three cases all are quite disturbing.

There’s a prison in New Mexico that pretty much is the pulse of a small town called Estancia. The Torrance County Detention Facility has operated there for about 30 years, and in July of 2017 – after operating at a loss for about 4 years – they announced it would have to close its doors if 300 state or federal inmates were not brought in by September.

According to the Santa Fe New Mexican:

Being such a small township and county, they don’t have a jail of their own, and will need to figure out where to put 50-75 inmates per month.

You might be thinking, “Oh no! People are losing their jobs!” In fact, city managers and elected officials were calling this unfortunate and asking for help to keep the facility open.

But think about that for just a second. In what universe is it a tragedy for a prison to close due to lower crime? That’s a sign of something GOOD! The idea that an entire town became economically dependent on the imprisonment of fellow citizens is really sick. Prison for profit and policing for profit are disgusting enough, but they roped in an entire town to where they were so fearful of losing their jobs, they were asking for help to keep the facility open.

But what would that help look like? “Hey go out and convict people of something so we can keep the facility open!” That shouldn’t make anyone feel good no matter what your political inclinations might be.

A town that relies on production of useful things, like software or cars or coal could also face this same problem if the market moved away from it, but they could still compete to keep their market share and it wouldn’t have nearly the same implications and fighting for a prison to stay open.

This is just a glimpse at the byproduct of cronyism. Private and public collusion leads to dependency and sometimes targeting private innocent individuals to keep an unsustainable deal going.

I’ve written before about how malls are not long for this world. With the internet came online shopping, which took a huge chunk of revenue away from the traditional brick and mortar store. People are gravitating toward experience over material, and that’s just how it is.

Starbucks is a combination of both retail and experience as is its counterpart Teavana. Teavana, however has not been very successful, and this past July Starbucks announced it would be closing down its 379 locations.

This is an example of responsible market behavior: They took the risk. It didn’t work out. They are calling it quits. Simple right?

This is where the malls and Starbucks cross paths and the devil shows up at the crossroads.

Simon Property Group found out about this, and rushed to a local court to file an injunction against 77 closing Teavana locations that happened to be in their malls. They claim it would hurt their malls MORE than it would hurt Starbucks to keep them open. The vacancies made by such a high profile tenant in the malls would discourage further patronage.

“[Judge Heather] Welch, in a 55-page order, found that the very profitable Starbucks could absorb the financial hit — estimated by Starbucks to be $15 million over five months — better than Simon could. The mall operator did not provide an estimate of how much the closings of the Teavana stores would hurt them.”

A couple things to keep in mind from the NY Post’s article:

What does this mean for other malls and their tenants? This judge just set a shocking precedent that should have every single mall retailer shaking in their boots. If you need to close locations to keep the overall corporation afloat, you might not be able to unless you can prove your business will suffer more than the mall property.

Again, the only regard for the victims of this public-private arrangement is that they are disposable.

I’ve called government a money launderer for a while now. And this story absolutely confirms it. Amazon has been looking for a place to call its second home for a while, and intends to make a decision at the beginning of 2018.

It received nearly 238 proposals from various cities and regions vying for the estimated $5 billion in investments and 50,000 jobs it plans to bring with it.

One proposal came from Chicago. Chicago has a history of hyper regulation, fiscal malfeasance, and record breaking corruption, so you can only imagine the audacity of their proposal.

Chicago is offering to let Amazon keep $1.32 billion in tax revenue generated by its employees.

That’s right. Amazon’s employees would still pay their regular income taxes, but it would all be given back to Amazon.

“The Illinois program, called the Economic Development for a Growing Economy (EDGE) Tax Credit, grants 100% of employee taxes to participating companies for up to 10 years. Indiana, Mississippi, and Missouri have similar programs.”

I don’t understand why the city couldn’t just cut Amazon’s corporate taxes rather than laundering the taxes of its employees. Basically, Amazon employees would be paying taxes to their employer. The employees are paying for the privilege of having an employer.

While this hasn’t happened (yet), it’s not uncommon among states to offer such a proposition.

All three of these cases point to a larger problem: deals being made at the expense of individuals between government and corporations. I’m all for using corporations to protect your assets, and I’m all for earning your way in the market. But a model that relies on a perpetual influx of inmates, or a model that compels one business to operate at a loss for the sake of another, or a model that extorts employees to lure in their employer are highly immoral.

Government insists upon interfering, and this is the fascistic result.

Government monopolies as with the USPS or over local rights […]