The State Department is denying American citizens their passports because they don’t believe the authenticity of their birth certificates. 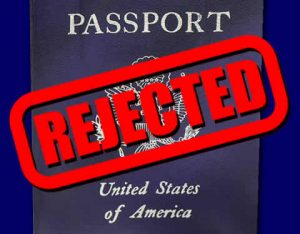 I’ve been writing about some pretty gruesome things coming out of various governments. One was the IRS being able to revoke or withhold passports from those who are delinquent in their taxes. Some balked at the idea that the IRS could theoretically interfere with gun ownership or adoption; and further at the idea of that sort of authoritative abuse spilling into other areas of American life leading to further violations of civil liberties.

Okay. But how much longer does that fantasy have? Various regulations and laws are often trotted out predicated on the most nefarious scenario, right? Look at the TSA. Despite the fact that they haven’t prevented or caught a single terrorist, they still manage to ride the coattails of security and safety as their justification for existing. The hyper investment in the military has yielded similar results. It’s really just led to a lot of unsustainable waste.

It’s like how you end up defining “public”. It’s everyone else except you, only everyone is operating on that understanding. I am the public to you, and you are the public to me.

That’s important because these same people believe they are part of some elite club, like Jews on Passover. They are “Americans”, so the tyranny and wrath of government just passes over them. I find that absolutely laughable and historically unfounded.

Let me share yet another example of what I mean:

The U.S. is denying passports to its citizens, but it’s NOT the IRS this time. It’s the actual State Department. Headlines being what they are, I of course expected to hear about the criminal past of these folks who were denied but was sorely disappointed if not slightly shaken by what I found.

American citizens are having the authenticity of their citizenship questioned.

If that wasn’t bad enough:

“In some cases, passport applicants with official U.S. birth certificates are being jailed in immigration detention centers and entered into deportation proceedings. In others, they are stuck in Mexico, their passports suddenly revoked when they tried to reenter the United States.”

This isn’t singularly a Trump issue, by the way. Though he’s not excused from this table entirely. Nor did this just fall out of the sky, all of a sudden. This finds its beginnings back in the 1950s, when apparently some midwives were issuing US birth certificates to babies actually born in Mexico. This practice continued for an estimated four decades.

These same midwives also delivered plenty of babies legally and legitimately born in the United States, so it’s really impossible to distinguish one from the other.

In 2009, the ACLU reached a settlement. Per Vanita Gupta, staff attorney with the ACLU Racial Justice Program who worked on the case along with the ACLU Immigrants’ Rights Project, “Citizens will no longer be denied a passport solely because of their race, ancestry or because they happened to be born at home with a midwife.”

The denial of passports slowed down under Obama. Currently, while many are not receiving official “denials”, their applications are being rejected. This is doesn’t amount to an absolute “NO”, but it is the equivalent of “not right now due to insufficient information”. The State Department is requesting some people produce further documentation and proof beyond that of a birth certificate, such as evidence of their mother’s prenatal care, a baptismal certificate, and rental agreements from when they were infants.

The State Department insists that this is a normal practice and there is no increase in incidents. However, immigration attorneys are telling a different story. In fact, this has expanded to cases beyond those just involving midwives.

The McAllen area had a gynecologist who passed away back in 2015 by the name of Jorge Trevino. He delivered over 15,000 babies in his career. By way of a rumor from another doctor in Mexico, a claim was made that at least ONE fraudulent birth certificate came out of Dr. Trevino’s office. Now apparently, the babies he delivered are under suspicion.

I’m not saying there aren’t people wandering around the US with fraudulent birth certificates. I’m saying, who cares? And why are THEY paying the price for something people who are dead and gone did 40 years ago?

The people who squawk about the “Dreamers” not being here legally, are oddly absent when it comes to those who have proof of citizenship are still being threatened with deportation.

I mean, what is the excuse for denying a 40 year-old who served not only in the military, but as a border control agent, AND prison guard a renewal of his passport? A renewal, meaning he was initially believed to be a citizen when he served in those various government capacities AND when his original application for a passport was granted.

Attorney, Jaime Diez, represents twenty Americans who have been sent to detention centers.

He also “represents dozens of U.S. citizens who were denied their passports or had their passports suddenly revoked. Among them are soldiers and Border Patrol agents. In some cases, Immigration and Customs Enforcement agents have arrived at his clients’ homes without notice and taken passports away.

“The State Department says that even though it may deny someone a passport, that does not necessarily mean that the individual will be deported. But it leaves them in a legal limbo, with one arm of the U.S. government claiming they are not Americans and the prospect that immigration agents could follow up on their case.”

So, I guess if you’re name is John Smith and you were born in Kansas, this might not affect you. But if you happen to have a name like Juan or a last name like Rodriguez, and happen to be born in a border state, you might experience a few hiccoughs in getting a passport.

Once again, the regulation and enforcement dragnets ensnare innocent Americans. In some cases, it has the government cannibalizing its own!

Your body is being tracked, and you could be unwittingly […]